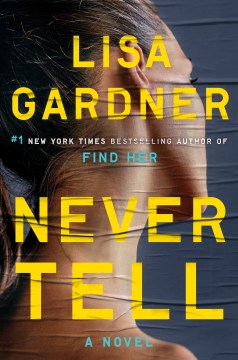 Veteran Boston PD detective D. D. Warren, still on her game, returns in the tenth book (after Look for Me, 2018) in an outstanding series by New York Times best-selling Gardner. When a man is found dead with his laptop shot to pieces, the police arrive to find the victim's pregnant wife holding the gun. Flora Dane, working for D. D. as an informer, recognizes the victim, Conrad Carter, on the news and remembers a terrifying encounter she had with him during her captivity by a sadistic killer. D. D. recognizes the accused, Conrad's pregnant wife, Evie Carter, from a case years ago when Evie shot and killed her father. That shooting was ruled an accident, but D. D. finds herself reconsidering that earlier judgment. The investigation unfolds, in turn, in the separate narratives of D. D., Evie, and Flora; and the suspense builds as the truth about each of their experiences emerges. The wrap-up here is just a bit too neat, but Gardner's fans will not be disappointed by this insightful look into the impact of crime on its victims. Copyright 2018 Booklist Reviews.

Sgt. Det. D.D. Warren and victim advocate Flora Dane have a sense of d&eacute;j&agrave; vu when Conrad Carter is shot dead, with wife Evie found holding the gun. D.D. recognizes Evie from the supposedly accidental death of her father, while Flora recognizes Conrad from the time she was held hostage&mdash;her captor knew the man. Two fan favorites link up on a third case.

Det. Sgt. D.D. Warren's latest case, a woman accused of murdering her husband, takes a macabre twist when D.D. recognizes Evie Carter as the suspect in her very first case, the 16-year-old who shot and killed her father, a renowned Harvard professor. It gets even stranger when not only this case starts unraveling but it seems the murdered husband has ties to a crime involving D.D.'s confidential informant, Flora Dane, herself a survivor of a heinous crime. Book ten in the series (after ) presents an exceptional, fast-paced, and disturbing cat-and-mouse game with superscary bad guys and dark-web dealings that will keep readers guessing until an ingenious aha moment. The complicated characters, a brilliantly convoluted connect-the-dots plot, and nonstop action all create a fantastic read; longtime fans will appreciate the costar cameo from Gardner's acclaimed "FBI Profiler" series. The author's compassion for Flora will pull heartstrings, and her portrayal of D.D. in her element fighting crime with her old teammates while remaining a loving wife and mother, is genuine. Fans of J.T. Ellison, Hank Phillippi Ryan, contemporary crime drama, police procedurals, and psychological thrillers will devour Gardner's latest. [See Prepub Alert, 8/10/18.]

In Thriller Award winner Gardner's nail-biting ninth novel featuring Boston PD Sgt. Det. D.D. Warren (after 2017's ), police break into the home of pregnant math teacher Evelyn Carter, who's standing over her husband Conrad's dead body with a freshly fired gun in her hand. Though Evie claims her innocence, D.D. pegs her as the killer. She remembers investigating Evie 16 years earlier for the accidental shooting and murder of her own father, Earl Hopkins, and concludes that two point-blank-range shootings aren't coincidental. Once the news of Conrad's murder goes public, kidnapping survivor-turned-vigilante and D.D.'s unofficial informant, Flora Dane, asserts that she recognizes Conrad as a man who was acquainted with her kidnapper, Jacob Ness. Flora revisits her dark, disturbing past with the help of a true crime blogger in an effort to connect the two men. As readers unravel secrets that tie these two murders together, Gardner questions how well anyone can truly know spouses and families. The conclusion may not come as a shock, but Gardner's commendable storytelling will keep fans eagerly waiting for the next outing for D.D. and Flora. Author tour. Agent: Meg Ruley, Jane Rotrosen Agency. (Feb.)