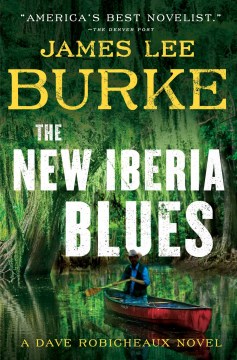 *Starred Review* At 82, Burke just keeps getting better, his familiar theme of an idyllic past at war with a demon-drenched present taking on more subtle levels of meaning; his storied lyricism drawing on a new range of powerfully resonant minor chords; his now-iconic characters—Cajun police detective Dave Robicheaux and Dave's running buddy and guardian angel, Clete Purcell (a heart as big as the world)—feeling weighed down by the burden of age yet at the same time emboldened by the knowledge that although we would never change the world . . . the world would never change us. In this twenty-second Robicheaux novel, Dave is again threatened by forces from within and without, but this time, those forces interact to produce a kind of nuclear reaction on the lives of Robicheaux, his loved ones, and the inhabitants of New Iberia, Louisiana. It begins with the first of a series of ritualistic murders—a woman crucified and floating on a barge near the estate of a local boy made good, Hollywood director Desmond Cormier. As Dave and new partner Bailey Ribbons investigate, Dave becomes convinced that either Cormier or one of his entourage is deeply involved in the killings, causing strained relations with Dave's daughter, Alafair, now a novelist and screenwriter who is working on a film with Cormier. Further seasoning the stew, Dave finds himself attracted to the much-younger Bailey, filling his mind with thoughts and desires that boded well for no one. And, yet, there are signs of hope here—even a glimmer of marriage between past and present—that give the novel a new dimension, but not before an all-stops-out finale with the power of cannon fire in the 1812 Overture. HIGH-DEMAND BACKSTORY: A new Dave Robicheaux novel will always be a major publishing moment, and this one is bigger than most. Copyright 2018 Booklist Reviews.

A young woman is crucified near the Cyrpemort Point estate of Hollywood director Desmond Cormier, and Det. Dave Robicheaux finds neither the director nor his actor friend forthcoming.

Det. Dave Robicheaux is haunted by ghosts, both his own and the one behind the brutal tarot-card murders. Native son Desmond Cormier is back from Hollywood, shooting part of his movie in the local swamplands of Iberia Parish, where locals are suddenly being killed in unusual ways—victims wear charms to ward off bayou evil, and signs of black magic and religious crusades mark the crime scenes. From Cormier, the religious zealot Hugo Tillinger, and Robicheaux's deadly hit-man nemesis "Smiley" Wimple, the murderer could be anyone. Robicheaux finds the blues at a crossroads—the clash between light and dark and the struggle to quell his inner demons. Will he be forced to repay the debt he owes the dead? No one paints a picture of life in the sultry Louisiana bayou better than Burke. Readers drawn to the Cajun grit and Robicheaux's charm will love wading with him through the mists and Spanish moss of the swampland, peering into his psyche while hunting a psychopathic killer. [See Prepub Alert, 7/2/18.]

In Edgar winner Burke's masterly 22nd novel featuring Iberia Parish, La., detective Dave Robicheaux (after 2018's ), Hollywood director Desmond Cormier, whom Robicheaux knew 25 years earlier as a young man on the streets of New Orleans with big plans of heading to California to make movies, returns to Louisiana to shoot his next film. When the crucified body of a woman is found floating in the bay close to Cormier's waterfront estate, Robicheaux investigates. Meanwhile, his pal Clete Purcel witnesses a man leap from a moving train into the bayou. Could the presence of this man, escaped convict Hugo Tillinger, somehow connect with Robicheaux's case? Several other bodies turn up, all grotesquely staged to represent cards in a tarot deck. Robicheaux is convinced that Cormier's film crew is involved, but he soon finds himself in a shadowy world of rogue cops, mobsters, and a childlike assassin named Smiley. With his lush, visionary prose and timeless literary themes of loss and redemption, Burke is in full command in this outing for his aging but still capable hero.