One of us is next / Karen M. McManus. 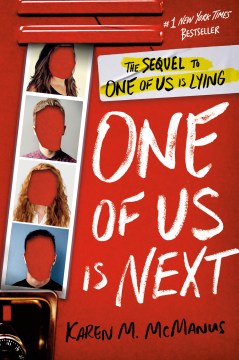 A year ago, in One of Us Is Lying (2017), Simon Kelleher, infamous creator of a gossip app, died during detention at Bayview High. Since then, the students in detention with him—nicknamed the Bayview Four—have all been cleared of his murder, graduated, and moved on. But Bayview remembers. At the high school, lesser copycat apps come and go, but nothing sticks until the game arrives as a mass text. The rules are simple: it's truth or dare. When Phoebe, the first target, doesn't pick one, her worst secret is leaked. As she teams up with Maeve, the sister of one of the Bayview Four, and her friend Knox, the game intensifies: the dares are getting dangerous, but everyone wants to keep their secrets. McManus offers a companion that, while set in the same sphere as her hit debut, takes entirely different cues, leaving readers new and old with a dizzying array of fresh twists. A nonlinear narrative and breakneck pacing, combined with the tech element and the already-intense high-school atmosphere, make this a thrilling read.HIGH-DEMAND BACKSTORY: One of Us Is Lying was a best-seller and a frequent flier on best-of lists; this companion, which is peppered with familiar faces, has all the twists and turns that readers loved about its predecessor. Grades 9-12. Copyright 2019 Booklist Reviews.

McManus follows up her page-turning with an equally breathless read, this time focusing on secondary characters from the original story. Following the events of the first book, the Bayview Four—Bronwyn, Addy, Cooper, and Nate—have now gone their separate ways. Only Addy remains in town, working as a server, alongside Phoebe, at Café Contigo. Maeve, Bronwyn's younger sister, a leukemia survivor, spends a great deal of time there with Knox, her best friend and former boyfriend. When a new Reddit thread mysteriously begins under the moniker "Vengeance Is Mine," and an anonymous texter begins a Truth or Dare game on Bayview High students' phones, the new friends' secrets are revealed in a public and embarrassing way, via school-wide texts. The anonymous texter ends the reveal with a warning: "Always take the dare." When the dares go from shocking to dangerous, Maeve, Phoebe, Addy, and Knox find themselves at the center of a new mystery with an even more dangerous puppet master. Full of exciting and unexpected twists and racing toward a shocking conclusion, McManus's tale will not disappoint fans, and those unfamiliar with her previous work will inhale this complicated story of friendship and revenge. Ages 14–up.