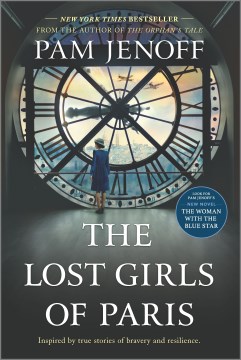 Inspired by actual historical events, internationally best-selling Jenoff (The Orphan's Tale?, 2017) reaches back in time to craft another gripping WWII-era tale. In 1946, still grieving from the tragic loss of her husband, Grace Healey stumbles across an abandoned suitcase in Manhattan's Grand Central Terminal. Overwhelmed by curiosity, she opens the suitcase, discovering a cache of photographic portraits of 12 women. Intrigued and inspired by these photographs, she sets out on a quest to uncover not only the identity of the suitcase owner but also the links that irrevocably bind these women to one another. As the novel unfolds, Grace discovers that the women were members of an Allied spy ring based in London. Sent to occupied Europe to aid and abet Resistance movements, they never returned. Grace becomes more and more attached to their individual and collective stories as details of their activities and eventual fates begin to emerge. Jenoff breathes life into the tale of a committed Band of Sisters who displayed boundless courage in the face of historically dire circumstances, creating a compelling and exciting read. HIGH-DEMAND BACKSTORY: Book-club favorite Jenoff's new WWII tale of a dozen brave women spies is so captivating, it's being launched with an enormous print run and similarly big promotional campaign. Copyright 2018 Booklist Reviews.

Once again, Jenoff crafts fiction inspired by World War II, this time introducing us to war widow Grace Healy, who in 1946 finds a suitcase at New York's Grand Central terminal filled with photographs of women. Learning that the women were spies deployed out of London during the war and that 12 never returned home, Grace determines to uncover their stories. Jenoff's signature piece, , has sold over 350,000 copies.

In 1946 New York, newly widowed legal secretary Grace Healy stumbles upon a suitcase labeled with the name Trigg containing a dozen photos of women with only first names and no other identifiers. She learns it belongs to Eleanor Trigg, an outsider with a painful past and the leader of a group of secret female agents sent from London into occupied Europe during the war. These young women, who posed as radio operators, were charged with sabotaging the Germans and arming the citizens. Grace feels a connection to Eleanor and the girls, yearning to discover why they never made it home, and creating an element of mystery to the story. She's especially drawn to single-mother Marie, who was sent to Paris and served in Trigg's Vesper circuit under the direction of roguishly handsome Julian. In the City of Light, passion and heartache greet the brave patriot. Jenoff () seamlessly weaves the stories of three remarkable women in this fast-paced title that boasts an intriguing plot and strong female characters. Recommended for fans of Martha Hall Kelly's and Kate Quinn's . [See Prepub Alert, 8/20/18.]

Jenoff's terrific, fast-paced novel follows a network of female WWII operatives in a smartly constructed narrative. In 1946 New York, young war widow Grace Healy stumbles upon a suitcase at Grand Central with photographs of 12 women inside. She follows a cold but irresistible trail through New York and Washington, D.C., determined to learn about the women and, in the novel's second story line, uncovers information about the girls' leader, the indomitable Eleanor Trigg: "Her style was brusque, unfeminine and unquestionably stern." Eleanor had recruited Marie Roux in 1943 for the Special Operations Executive (SOE) to work with the French Resistance as an undercover radio operator. Marie's deployed to work in France with an intense, handsome circuit leader. As much as Marie often shows courage and pluck, some of her behaviors are misguided, including putting lives at risk for her budding romance when she pursues her own ideas rather than SOE orders regarding dangerous field operations. Despite Marie's sometimes dubious decisions, her colleagues in the field do show more guile as they fight in the Resistance, and Jenoff () allows their distinct personalities to shine. This is a mesmerizing tale full of appealing characters, intrigue, suspense, and romance. (Feb.)