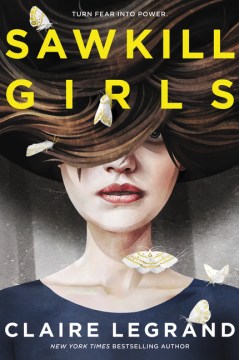 *Starred Review* On Sawkill Rock, girls disappear. Not that many, and it's not that strange; the island, with its slick cliffs and dark waters, can be treacherous. Still, the people of Sawkill tell campfire stories about a hungry monster—a monster that, for three girls, is about to become sharply real. Marion arrives on Sawkill Rock grieving her father's death. Plain, reliable Marion holds what's left of her family together, but when her sister vanishes, Marion begins hearing ominous warnings. Zoey's police-chief father has been unable to find Sawkill's missing girls, and Zoey's been obsessed ever since her best friend disappeared seven months ago. When the disappearances accelerate, Zoey starts to dig, unearthing more than she believed possible. Then there are the Mortimer women: Sawkill royalty who raise prizewinning horses. They are beautiful and influential, and Val is no exception. But the Mortimer women harbor a dark power, and as it grows stronger, Val must decide if she's going to give in to it or fight. Through this dank, atmospheric, and genuinely frightening narrative, Legrand weaves powerful threads about the dangerous journey of growing up female. In a world where monsters linger at the edges, this is an intensely character-driven story about girls who support each other, girls who betray each other, and girls who love each other in many complicated ways. Strange, eerie, and unforgettable. Grades 9-12. Copyright 2018 Booklist Reviews.

Sawkill Rock is an idyllic-seeming island--where young women disappear. Marion's family moves to Sawkill after her father's death, and shortly thereafter, her sister vanishes. Marion and two island girls, Val and Zoey, are pulled into the discomfiting mystery. All three characters are compelling, and readers will be unnerved and horrified as they get closer to the truth. Copyright 2019 Horn Book Guide Reviews.

An idyllic island hides a deadly secret in this atmospheric, Gothic-flavored chiller, which mingles elements of dark fairy tales and outright horror. Sawkill Rock is home to lush forests, rocky cliffs, marvelous horses, and the Mortimer women, who have lived there for generations. Marion Althouse, 16, recently lost her father and has just arrived on the island with her older sister, Charlotte, and their mother. Marion soon befriends the police chief's daughter, Zoey Harlow, and, to Zoey's chagrin, seems to be getting close to the beautiful schemer Val Mortimer, matriarch Lucy's daughter. When Charlotte goes missing, Marion discovers that 23 girls have disappeared in the past century and a half, including Zoey's best friend. It seems that something inhuman lives in Sawkill Rock's dense woods, immortalized in the grisly urban legend of the Collector, and the young women, each with an extraordinary emerging power, may be able to vanquish it— if they don't destroy each other first. Sure to win Legrand () plenty of new fans, this tale, which includes an asexual character and a beautifully wrought queer romance, focuses on the power of female friendship and what it means to pit women against one another in fiction and in life. Ages 14–up. Agent: Victoria Marini, Irene Goodman Agency. (Oct.)