Night-gaunts : and other tales of suspense / Joyce Carol Oates. 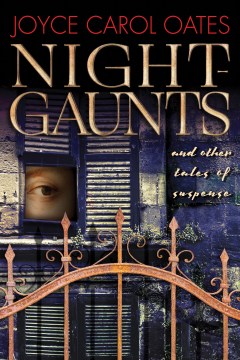 In her latest "tales of suspense" collection, following DIS MEM BER (2017), Oates dramatizes mysteries of the mind, her forte. An expert in crafting escalating inner monologues as her narrators struggle against malevolent circumstances and the mental aberrations trauma engenders, Oates continues her audacious inquiry into sexual terrors in six substantial, insightful, and creepy stories. Overweight, aging, boozy New England faculty wife Elinor decides to take revenge, but only in the fairest way possible, against the latest beautiful "long-legged girl" entrancing her husband. In "Sign of the Beast," young Howard, husky, clumsy, and tagged with a birthmark on his cheek, is appalled and aroused by his wildly inappropriate Sunday-school teacher, and when her body is found, his reaction shocks everyone. Oates unites a vulnerable misfit and a mad scientist in "The Experimental Subject," a grotesque tale with a redemptive twist. The intriguing title tale is a sensitive, clever, and affecting tribute to horror master H. P. Lovecraft, who coined "night-gaunts" to describe the eerie creatures that plagued him. Oates' spookiness is visceral, psychologically involving, and socially astute. Copyright 2018 Booklist Reviews.

From a jealous wife's playing Russian roulette with Wedgewood teacups to a visualization of Edward Hopper's : six creepy stories.

The eponymous creatures haunting the Providence, R.I., mansion where the gothic title story is set seem about as terrifying as toddlers draped in bedsheets compared to some of the humans in this unsettling collection from Oates (). "Sign of the Beast" centers on Mrs. S___, a sadistic Sunday school teacher who both angers and sexually arouses her lumbering, self-conscious student, Howard. In "Walking Wounded," L___, a 41-year-old cancer patient "eviscerated" by his surgeries, starts stalking a wraithlike young woman—when he's not fantasizing about chloroform and dumping a body in the local lake. Ghastliest of all, however, are the scientific researchers of "The Experimental Subject," in which senior technician N___, acting with the enthusiastic backing of his government-funded primate laboratory team, performs an experiment on ungainly undergrad Mary Frances that may raise the hackles of #MeToo supporters. The upsetting journey is in no way redeemed by the slapdash resolution. Oates pushes the boundary between the disturbing and the offensive with mixed results. Agent: Warren Frazier, John Hawkins & Assoc. (June)

Her body and other parties: storiesMachado, Carmen Maria

Growing things and other storiesTremblay, Paul

A collapse of horses: storiesEvenson, Brian, 1966-