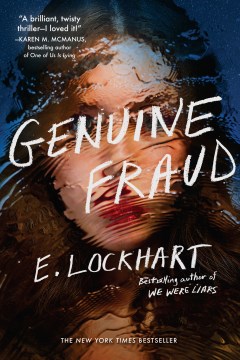 *Starred Review* It's difficult to describe Lockhart's latest psychological thriller without dipping into spoilers, but here are the pertinent details: Jule, a peripatetic, athletic, superhero-obsessed teen girl is best friends with rich, restless Imogen, who recently committed suicide. When readers meet Jule, she's lounging at a tony resort in Mexico, eating junk food, and enjoying the sun. It's clear she's on the run, though from whom or why isn't clear, and Lockhart strings readers along with a clever narrative gambit. In a clipped, detached tone, Lockhart tells Jule's story in reverse, and with each step backward, she peels away juicy layers of intrigue. As the relationship between Jule and Imogen comes into focus, Lockhart explores themes of jealousy, loyalty, privilege, and origins. Imogen, who was adopted, is fixated on the idea of feeling a strong sense of identity, while Jule constantly relies on an unlikely story to explain her childhood. But can they really know each other at all? It's a captivating, suspenseful story made all the more bewitching by Lockhart's twisty narrative, and she constantly keeps readers guessing with unpredictable turns and eye-opening reveals. This quietly unsettling, cinematic novel is deliciously suspenseful, and while it's slim, it packs a real punch. Teens who love to hate antiheroes will be enraptured. HIGH-DEMAND BACKSTORY: Best-selling Lockhart's getting a top-shelf marketing campaign, so be prepared for an onslaught of fans eager to get their hands on her latest. Grades 9-12. Copyright 2018 Booklist Reviews.

In Lockhart's latest intoxicating thriller, eighteen-year-old protagonist Jule is cold, tough, and in trouble with the law, but displays an endearing softness as we learn about her friendship with wealthy Imogen, whom Jule misses dearly. As chapters descend in reverse chronological order, readers get breadcrumb-like pieces to the puzzle of why Jule is running, what happened with Imogen, and what makes the intricately drawn anti-heroine tick. Copyright 2017 Horn Book Guide Reviews.

As soon as Lockhart's latest intoxicating psychological thriller (We Were Liars, rev. 5/14) opens in Cabo San Lucas, Mexico, readers will be perversely enamored of eighteen-year-old narrator Jule. She's cold--sociopathic, even--and in trouble with the law, but a sexy lead. She's strong and tough enough to defend herself (and then some), intelligent, and intuitive; a feminist who contemplates gender persecution in society and in the hero tales she thinks herself worthy of: "women were rarely the centers of such stories...they were eye candy, arm candy, victims, or love interests...they existed to help the great white hetero hero on his fucking epic journey." And Jule shows an endearing softness as we learn about her friendship with beautiful, wealthy Imogen, whom Jule misses dearly. To say more would give away too much. However, as chapters descend in numerical order and reverse chronology, it becomes increasingly clear that Jule is an unreliable narrator the deceptive likes of which many readers won't be prepared for. With each subsequent chapter and new globe-spanning setting, readers get breadcrumb-like pieces to the puzzle of why Jule is running, what happened with Imogen, and what makes the intricately drawn anti-heroine tick. The appended note lists many inspirations for the novel, among them: "Victorian orphan stories," "superhero comics," "stories of class mobility," and a few specific books, including Patricia Highsmith's The Talented Mr. Ripley. Indeed, "particular debt" is owed to Highsmith, but Lockhart's command of structure, pacing, atmosphere, and character are accomplishments all this author's own. katrina hedeen Copyright 2017 Horn Book Magazine Reviews.

Lockhart blends the privileged glamour of with a twisty, backward-running plot that's slick with cinematic violence. Calling to mind her own , she offers a shrewd critique of the roles traditionally available to female characters in literature and film. This striking exploration of the nature of identity revolves around the relationship between Jule and Immie, two similar-looking orphans. Jule—a fierce physical fighter and self-taught expert at disguise—will do whatever it takes to escape her bleak past. Wealthy and charismatic Immie, by contrast, wafts pleasantly through life, living on Martha's Vineyard while taking time off from college. Pushed into Immie's privileged inner circle via a case of mistaken identity, Jule is swept into an intense friendship—and a series of events that play intentional tribute to Patricia Highsmith's The Talented Mr. Ripley, among other literary precedents. A bracing pace, a slew of far-flung locations, and a storyline that runs mostly in reverse will keep readers on their toes, never entirely sure of what these girls are responsible for or capable of. Ages 12–up. Agent: Elizabeth Kaplan, Elizabeth Kaplan Agency. (Sept.)