Patron saints of nothing / Randy Ribay. 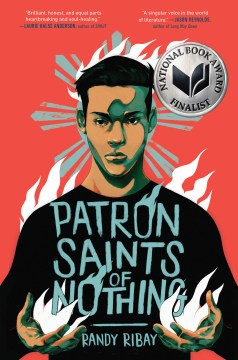 *Starred Review* After finding out about his cousin Jun's violent death, Jay Reguero travels from America to the Philippines to uncover how such a gentle person met such a grim end. He finds that the place that he remembers—the place of his birth—has changed in the face of a sweeping drug war initiated by President Rodrigo Duterte, a war that Jun's father, Tito Maning, enthusiastically endorses. Jay digs into the circumstances of Jun's death, while navigating the sinuous history between family members, including the schism created by his own father's decision to raise his children in America. Jay's investigations are an intriguing setup for what is actually a deep, nuanced, and painfully real family drama. Jay himself is a relatable character for biracial readers straddling two different cultures. This dynamic comes into play both when he tries to convey his feelings to his American friends and when he travels abroad and is treated like an outsider by other Filipinos despite looking the same. Ribay's focus, however, is on showing the current-day war on drugs ravaging Filipino society, characterized by extrajudicial vigilante killings endorsed by the highest levels of government. By deftly weaving key details into Jay's quest for the truth, Ribay provides a much-needed window for young people of the West to better understand the Filipino history of colonization, occupation, and revolution. Grades 10-12. Copyright 2019 Booklist Reviews.

Filipino American teen Jay Reguero is approaching the end of high school in Michigan when he learns of his cousin Jun's untimely death in the Philippines. Jay and Jun had, as pen pals, been close throughout their tween years. Haunted by the lack of information regarding his cousin's death (and by his own failure to respond to Jun's last letter), Jay decides to go to the Philippines to investigate. He receives an anonymous tip via social media suggesting the death was a murder by the police and makes a connection between his cousin's fate and President Rodrigo Duterte's (real-life) draconian war on drugs. Through myriad twists and turns, Jay uncovers the heartbreaking truth. He also, rewardingly, begins to assimilate into Filipino culture and find his next steps in life. "My family, myself, this world—all of us are flawed. But flawed doesn't mean hopeless…It doesn't mean lost." Ribay brings this coming-of-age story to vivid life through themes of addiction, complex family dynamics, and the experiences of children of immigrant families. Back matter includes an author's note giving more information about Duterte's war on drugs and a brief bibliography. monica tapia boyer July/Aug p.135 Copyright 2019 Horn Book Magazine Reviews.

Passionately and fearlessly, Ribay () delves into matters of justice, grief, and identity in this glimpse into the life and death of a fictional victim of President Duterte's war on drugs in the Philippines. In Michigan, Filipino-American high school senior Jay Reguero is struggling to decide what to do with his life when the sudden death of his cousin Jun raises painful questions about the violent drug war, and an unknown Instagram user convinces Jay that his cousin was wrongly executed. Sick of his relatives' refusal to discuss Jun's death and guilty that he let their once-close pen pal friendship lapse, Jay convinces his parents to send him to the Philippines to reconnect with his extended family and—unbeknownst to them—look into the mystery surrounding Jun's death. There, Jay connects with a culture he barely remembers from childhood visits and uncovers secrets that his cousin kept and his relatives are determined to forget. Ribay employs a delicate touch in portraying the tension inherent in growing up the child of two cultures, Filipino and American. Jay is a compelling character whose journey from sheltered and self-centered to mature, though clearly a work in progress, is well earned. Ages 14–up. Agent: Beth Phelan, Gallt & Zacker Literary Agency. (June)