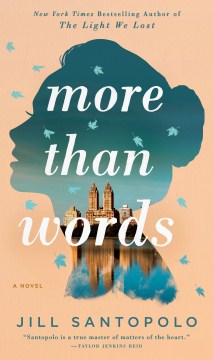 Nina Gregory has always lived her life within the lines, afraid to sully the name brought to prominence by her hotelier grandfather and father. Generally content to follow the path laid out for her by the father she adores, her role as a speechwriter for an unconventional New York City mayoral candidate is the one anomaly of her well-manicured life. Nina knows she is expected to take over her father's hotel business, so he humors her foray into politics. But then her father passes away from cancer, devastating her more than words can say. While grappling with grief, Nina uncovers the secrets her father left behind, devastating her even more. She wonders if she ever even really knew her father. And if she is her father's daughter, does she then even really know herself? ?The latest from best-selling author Santopolo (The Light We Lost, 2017) is a bittersweet and reflective novel of grief, loss, and coming into one's own. Fans of leisurely paced and character-driven novels will appreciate the time she spends developing Nina's voice and ensuring that it's heard. Copyright 2019 Booklist Reviews.

The author of acclaimed children's and YA series, Santopolo became an adult author with the best-selling . (Plus, there's a movie coming.) Here, Nina, whose father owns New York's high-end Gregory Hotels, has been raised to care deeply about her family's reputation. But a secret she learns when her father dies has her questioning not just him but all the men in her life.

Nina Gregory loves her work as a speech writer on the charismatic Rafael's political campaign. She looks up to him almost as much as she does her father, owner of the fashionable and luxurious Gregory Hotels. Nina's family name and legacy mean everything to her, and she's always tried to live up to his expectations for her life, even when they don't jell with her own beliefs. When her father dies, family secrets change the way Nina feels about everyone important to her, including her father, her fiancé Tim, and even the handsome Rafael. Nina must decide what really matters: going her own way or letting her family choose her future. Children's and YA author Santopolo's second novel for adults (after ) takes a fascinating look into the lives of New York City's superwealthy and political elite. Nina is a thoughtful and likable character who's forced to make life-defining choices that will keep readers enthralled. This breezy read is full of drama and romance, but at its core is a story of family and self-identity that will please women's fiction fans. [See Prepub Alert, 8/27/18.]

Santopolo follows 2017's with a heartfelt story about life, love, and taking chances in the aftermath of loss. Thirty-something hotel heiress Nina Gregory loves her job as speechwriter for New York mayoral candidate Rafael O'Connor-Ruiz, and she loves her boyfriend and lifelong best friend, Tim Calder. But she adores her father, Joseph, and as cancer weakens the once-vibrant man, Nina treasures the time they have left. When Joseph finally succumbs to his illness, the devastated Nina must pick up the pieces and take the reins of the Gregory Corporation. Nina soon discovers that her father, who revered the Gregory legacy and lived life in the spotlight, was hiding secrets about his company and her mother, who died when Nina was a child. A potent—and mutual—attraction to Rafael complicates things further. Nina's self-discovery is bolstered by the strong women in her life, and her struggle to accept her larger than life father as a flawed man will resonate with readers. This is a charming and sexy crowd-pleaser.

Map of the heartWiggs, Susan

Lost and found sistersShalvis, Jill
If you only knewHiggins, Kristan