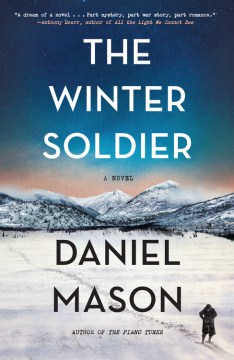 Their love was impossible in more ways than one. A medical student from Vienna sent to a makeshift hospital during WWI is instantly amazed by the no-nonsense nun who had been nursing injured soldiers with little help for months. Lucius' medical-school training—attending lectures and reading books—did almost nothing to prepare him for the horrors of tending to shell-shocked soldiers, not to mention the plague of lice and rats all around; but as Sister Margarete gently guides him, their relationship slowly grows into something deeper. Beyond the constant threat of the ever-shifting front and Margarete's own vows, however, the arrival of one patient who seems almost beyond rescue will test them severely. A sweeping story of love found and lost, steeped in medical details that reveal the full horrors that ill-equipped doctors and nurses faced over years of vicious trench warfare, The Winter Soldier is a vivid account of one man caught up in the epic forces of war, who desperately fights against the tides of change in search of redemption. Copyright 2018 Booklist Reviews.

Mason, who made a name for himself with the international best seller while still a medical student, returns with a story featuring a medical student—22-year-old Austrian Lucias, who, during World War I, enlists to work at a field hospital. He's the only doctor at his post, in the far-off, frigid Carpathian Mountains, and he's never even picked up a scalpel. His decision regarding one unconscious patient changes everything.

When war breaks out in 1914, Lucius, a promising medical student, enlists in the Imperial Austrian Army and ends up stranded in a typhus-ridden outpost in the Carpathian Mountains. The other doctors have fled. There is only a nurse, Sister Margarete, who becomes his aide and teacher as he learns medicine in the act of practicing it. A soldier is brought in with no visible wounds: he won't eat or talk. Lucius and Margarete nurse him back to fragile health. Then the Hussars arrive, and their officer sees only a malingerer, a soldier with no visible wounds. The officer's brutal treatment of the patient undoes all the good that has been done: a man who was damaged only on the inside is left damaged on the outside, too. The soldier is taken away and Lucius is consumed with guilt for failing to intervene. Margarete and Lucius fall in love, but she, too, disappears. The rest of the novel is about Lucius's three-year hunt to find her. Mason's (psychiatry, Stanford; ) lyrical and affecting novel about the costs of war and lost love will satisfy readers of quality fiction. [See Prepub Alert, 3/12/18.]

In Mason's moving historical novel (after ), Lucius Krzelewski is a 22-year-old, upper-class medical student in 1914 Vienna who, after Austria enters World War I, volunteers for duty. Despite his lack of practical experience, he is sent to a field hospital in the Carpathian Mountains, where he is expected to perform emergency surgeries. Fortunately, he is guided by Sister Margarete, a nurse with a mysterious background who teaches him the surgical skills he lacks. They go on to become lovers. One day, they are given a new patient, a shell-shocked soldier who can only communicate by drawing pictures. Lucius becomes obsessed with finding a cure for this patient, who is dubbed the winter soldier. Then, Margarete disappears and Lucius gets lost looking for her. He is transferred to another medical unit, then is returned home to Vienna. But despite an arranged marriage, Lucius can't go on with his life until he finds out what happened to Margarete and the winter soldier. Mason's old-fashioned novel delivers a sweeping yet intimate account of WWI, and in Lucius, the author has created an outstanding protagonist. Reminiscent of Thomas Keneally's , this novel is a fine addition to fictional testaments of doctors and nurses during wartime.