The kingdom of copper / S.A. Chakraborty. 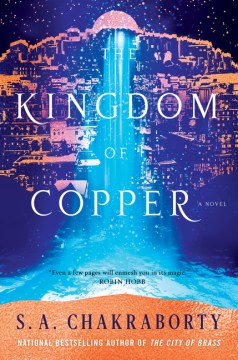 *Starred Review* Following The City of Brass (2017), Dara has been resurrected, and he is more powerful than ever; prince Ali—banned from Daevabad—discovers his new water abilities; and Nahri has married Ali's brother, the heir apparent of Daevabad, in exchange for a generous dowry. As these three story lines converge, the city of Daevabad remains the crux of conflict. Tensions run high between the pure-bloods and abused half-bloods, and the king maintains "peace" by oppressing those who have already suffered the most. Everyone has ideas about how to fix the city, and as they attempt to do so all at once, the story spirals into a Game of Thrones­–like tale of political intrigue and war, with many shrewd factions vying for power. Chakraborty's deeply thought-out system of race relations and clashing classes mirrors real-world conflicts, making it all the more captivating—and frustrating—as the dream of peace grows more futile. The action scenes—vivid, entrancing, terrifying—will keep readers riveted, especially as enemies shift to allies, allies to friends, friends to enemies. With gorgeous world building, compelling characters, and clashing schemes, the second in Chakraborty's Daevabad trilogy will thrill her many fans. Copyright 2018 Booklist Reviews.

In , an Best Fantasy also short-listed for the Locus Award, a street hustler named Nahri in 1700s Cairo manages to summon up the dark and wily djinn warrior Dara, who takes her to the royal court of Daevabad. Now Dara has been slain in battle by Prince Ali, exiled for resisting his father, and Nahri finds herself alone and at the mercy of a king who could destroy her people. With a 100,000-copy first printing.

Five years ago, young con artist Nahri discovered her ability as a Daeva healer and traveled with djinn warrior Dara to Daevabad. The city is ruled by King Ghassan, who is descended from the Geziri tribes that conquered the Daevas and seized the magic-controlling Suleiman's seal. At the end of the last book, , Dara was killed by Ghassan's younger son, Ali. Nahri was forced to marry Ghassan's older son, Muntadhir, relinquishing her powers and people to his control. As Nahri chafes under Ghassan's thumb and increasingly cruel whims, she faces decisions she never thought she'd have to make. Not only is Ali alive, thanks to water magic from the fearsome marid, but Dara has been summoned back to the world to dethrone Ghassan and reclaim Daevabad from the Geziri. With a richly immersive setting and featuring complex familial, religious, and racial ties and divides, Chakraborty's second book in the trilogy wraps readers in a lush and magical story that takes over all the senses. [See Prepub Alert, 7/23/18.]

Chakraborty plunges right back into the action set up in with uneasy alliances, bitter rivalry, and explosive secrets in this richly developed fantasy set in an alternate 18th-century Egypt. In the aftermath of a thwarted escape and ensuing battle, heartbroken series heroine Nahri weds the king's heir; Prince Ali, seen as a threat to the king, is exiled and flees into the desert ahead of assassins; and Nahri's mother, Manizheh, uses warrior Dara's ring to recall him into service. Five years pass and Nahri remains in Daevabad, trapped by a vicious king who's using the lives of her people to force her compliance. But Ali's return sets in motion a chain of events that pushes the kingdom to the brink of civil war and intersects with Manizheh's campaign to recapture the city. Nahri must decide whom to trust when, once again, she is surrounded by death and betrayal. Chakraborty raises the tension and the stakes with emotional dilemmas that bring out the best and worst in these conflicted characters. This intriguing fantasy series appears to be well on its way to an exciting conclusion.