The rule of law : a novel / John Lescroart. 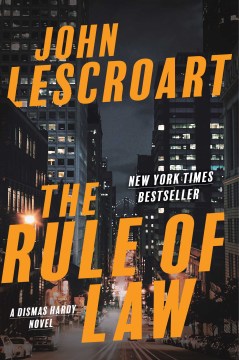 No-nonsense lawyer Dismas Hardy returns in this excellent thriller. When Hardy's longtime secretary, Phyllis, leaves work one day with no explanation, appears to vanish into thin air, and then returns to the office as though nothing has happened, Dismas is pretty sure something unusual is going on. When Phyllis is arrested and charged as an accessory to murder, he knows there's trouble afoot. Although this isn't exactly a new story—plenty of literary law-enforcement types have labored to prove someone close to them is innocent of trumped-up charges—Lescroart builds a solid case against Phyllis, one that neither Dismas nor the reader can easily ignore. Lescroart's novels are known as much for their abundantly human characters as they are for their rigorously plotted stories, and this one is a showcase for both of those attributes. Also impressive is the way Lescroart has kept his long-running series fresh by allowing Dismas to grow over the years. HIGH-DEMAND BACKSTORY: Lescroart is a certifiable A-lister. His series entries and stand-alones always draw a crowd. Copyright 2018 Booklist Reviews.

Lescroart stalwart Dismas Hardy is dismayed when ever-dependable secretary Phyllis starts acting strangely, even vanishing at times—just when her brother is released from prison. Then she's accused of being an accessory to the murder of a coyote who smuggled women from El Salvador and Mexico to the United States.

We know from the first page of this newest "Dismas Hardy" novel that attorney Ron Jameson has murdered his wife's lover, and she in turn has killed his partner and made it appear a suicide. Both have evaded detection and now, three years later, Jameson has been elected district attorney of San Francisco and given the opportunity to get back at high-powered lawyer Hardy, who campaigned against him. Hardy's longtime secretary Phyllis is arrested for murder after an undocumented immigrant's death is linked to her clandestine work for refugee sanctuaries. Hardy and his partners, who are familiar to readers of most of Lescroart's many previous novels, must try to free Phyllis and identify the murderer, all while defending themselves against the DA's very real threats to destroy their firm. Lescroart () deftly employs an ensemble cast to reflect a variety of viewpoints, including DREAMers, ICE agents, and current political trends. He skillfully ties it all together, but the ending feels a bit forced. Still, the series' legions of fans will enjoy Hardy's return from a brief retirement. [See Prepub Alert, 7/2/18.]

In bestseller Lescroart's enthralling 21st Dismas Hardy novel (after 2018's ), the San Francisco attorney is concerned when his long-suffering secretary, Phyllis McGowan, abruptly disappears. In searching her apartment, Hardy discovers that Phyllis has a dangerous hidden life: helping to move illegal immigrants fleeing ICE agents along a present-day underground railroad. When accessory to murder charges are brought against Phyllis, who later resurfaces, for the killing of a dangerous human trafficker, Hardy and his two partners at his newly re-formed law firm seek to save their colleague. Their most dangerous obstacle, however, is not ICE agents or vengeful smugglers but the city's new District Attorney, Ron Jameson. Determined to convict Phyllis and smear Hardy's new firm and anyone associated with him, Jameson embarks on a ruthless campaign of planted evidence and false testimony. Hardy must uncover the truth before he and those around him are destroyed by a powerful man with a secret to hide. Sharp dialogue and a timely plot help make this entry a winner.