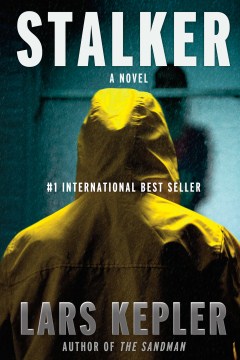 *Starred Review* After faking his death to protect his family from a serial killer in The Sandman (2018), legendary detective Joona Linna returns to Stockholm hoping to clear his friend, renowned psychiatrist Erik Maria Bark, of serial murder charges. Margot Silverman, the National Police's new expert on serial killers, has moved into Linna's office but hasn't yet managed to step into his shoes. She and her partner are hunting a killer who taunts police with voyeuristic videos taken through his victims' windows moments before he strikes. Hoping to use hypnosis to draw clues from a witness' memory, Margot consults Bark. For Bark, the new case awakens the shameful memory of a hauntingly similar crime. Years ago, he discarded alibi information that his patient, Rocky Kyrklund, revealed under hypnosis, and Kyrklund was subsequently (wrongfully?) convicted of murder. In a startling turn, Bark faces police scrutiny when he's connected to each of the new killer's victims. His only hope is Linna, who suspects the killer is the Preacher, a malevolent shadow buried in Kyrklund's memories. Kepler delivers a page-turning hunt for an expertly camouflaged killer that draws shocking connections between the hallowed halls of the Karolinska Institute, Stockholm's prostitution and drug scene, and Sweden's rural churches. The author's dark, complex procedurals are must-reads for readers drawn to Stieg Larsson, Mons Kallentoft, and Michael Connelly. Copyright 2018 Booklist Reviews.

Kepler's stellar fifth Joona Linna novel finds Joona, who faked his death in 2018's to protect his family from a serial killer, replaced as the Swedish National Police Authority's expert on "serial killers, spree killers, and stalkers" by Margot Silverman. In Margot's baffling first case, Maria Carlsson, an Ikea product adviser, was stabbed repeatedly in her home, and her facial features were almost completely effaced. Maria's killer posted a video of Maria putting on tights, filmed from her garden, to YouTube shortly before the murder. Before Margot can make any progress, another video is posted—of a woman eating ice cream and watching TV—that also is followed by bloody slaughter. Joona reenters the picture after he learns that his nemesis is dead, but his unconventional methods again land him in trouble. The reveal of the stalker's identity is a genuine gut-punch, albeit fairly clued. Kepler (the pen name for the husband-and-wife writing team of Alexander and Alexandra Ahndoril) does a masterly job of elevating the serial killer thriller beyond genre clichés and tropes.