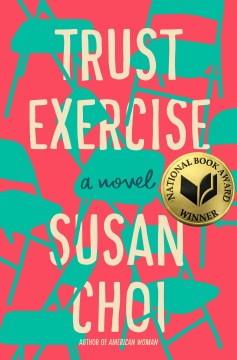 *Starred Review* "That whole thing about fiction not being the truth is a lie," one character admonishes another in Choi's fifth, and finest, novel. Returning to the multilayered teacher-student power struggles seared into My Education (2013), Choi's Trust Exercise should immediately put readers on alert: it will appear four times as a title—of the novel itself and as the repeated title of the book's three sections. Despite being a reference to a soul-baring acting exercise, "trust" will have little correlation to truth. "Trust Exercise" number one introduces Sarah and David, two 15-year-old students at a suburban performing-arts high school, precariously entangled with each other, overseen (manipulated) by their magnetic theater teacher, Mr. Kingsley. "Trust Exercise" number two picks up 14 years later, after more than 100 pages, revealing number one to be a large portion of Sarah's newly published novel, and its last page is where Sarah's former best friend, Karen, stopped reading. What happened (or not) thus far gets deconstructed, then expanded, culminating in a series of dramatically (of course) orchestrated reunions. "Trust Exercise" number three will render all that came before unreliable while exposing tenuous connections between fiction, truth, lies, and, of course, people. Literary deception rarely reads this well. Copyright 2019 Booklist Reviews.

Pulitzer Prize finalist Choi opens her new novel in the early 1980s South, where two first-year students at a high-powered performing arts high school fall in love and, like their peers, circle around acting teacher Mr. Kingsley like moths to flame. Years later, we meet David and Sarah again and learn that things were not as they had seemed.

In the first half of this latest novel from Choi (), Sarah is studying at a performing arts high school in the 1980s. Owing to adolescent miscommunication, her summer romance with fellow student David crumbles once school resumes in the fall. Drama teacher Mr. Kingsley takes his students through acting exercises that seem to cross boundaries of appropriateness, particularly when involving teenagers with raging hormones and volatile emotions. A visiting theater troupe from England adds to the chaos, which has repercussions decades later. The novel's second section takes a somewhat metafictional approach, as "Karen," a minor character in the first half, objects to the fictional approach taken by "Sarah" in recounting the events in her novel. Throughout, Choi neither sentimentalizes nor trivializes the emotional lives of the teens. Whether by design or chance, the first half of the novel feels "truer" than the more contrived plot machinations of the second half, in which several characters reencounter one another during a play production a decade later. The latter, retrospective approach serves best in examining the confusion and ambiguity of teenage sexuality and how that can be exploited. Recommended for readers who invite direct challenges to the novelistic form. [See Prepub Alert, 10/29/18.]

Choi's superb, powerful fifth novel, after 2013's , marries exquisite craft with topical urgency. Set in the early 1980s, the book's first section depicts the Citywide Academy for the Performing Arts, an elite high school in an unnamed Southern city. Galvanized by the charged atmosphere created by the school's magnetic theater teacher, Mr. Kingsley, 15-year-old classmates Sarah and David have an intense sexual relationship the summer between their freshman and sophomore years. Sarah, who has taken its secrecy for granted, is horrified when David makes their romance public that fall. She repudiates him, the two spend the year estranged, and she grows increasingly isolated until an English theater troupe makes an extended visit to the school. When she is pursued by one of the troupe's actors at the same time her classmate Karen falls in love with its director, the two young women form a fraught, ambivalent bond. The novel's second segment reintroduces the characters a dozen years later, shifting from Sarah's perspective into to a new viewpoint that casts most of what readers thought they knew into doubt. After the tensions of the past culminate in an act at once shocking and inevitable, a brief coda set in 2013 adds a final bold twist. Choi's themes—among them the long reverberations of adolescent experience, the complexities of consent and coercion, and the inherent unreliability of narratives—are timeless and resonant. Fiercely intelligent, impeccably written, and observed with searing insight, this novel is destined to be a classic.