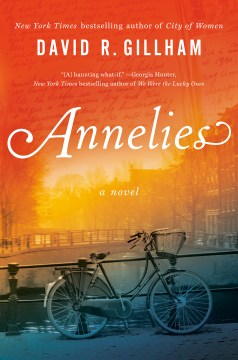 Anne Frank died at Bergen-Belsen concentration camp in 1945, just shy of her sixteenth birthday. Her world-famous diary gives powerful voice to the unmitigated horror of the Holocaust, and the hope that flourished despite it. Gillham's (City of Women, 2012) novel treads perilous territory: it imagines Anne as a survivor returning home. Gillham conjures a convincing atmosphere for postwar Amsterdam, though Anne is virtually unrecognizable. The girl who wrote "I still believe, in spite of everything, that people are truly good at heart" is transformed into a roiling mass of outrage, plagued by the apparition of her dead sister, Margot, and unkind to those who love her most. Some may find this deeply troubling, possibly offensive, even as Gillham contrasts Anne's anger with the attitude of other survivors, notably her father, who cautions that vengeance only causes more pain. He vows to put aside the past, live well, and love those remaining. These conflicting viewpoints center the novel, giving it relevance in today's rage-driven culture, especially as Margot warns: "Words have power. . . . You should be careful how you use them." Copyright 2018 Booklist Reviews.

The best-selling author of here focuses on one young woman, Anne Frank, the heartrending symbol of the Holocaust, imagining that she has survived the Bergen-Belsen concentration camp and immigrated to America with her father after the war.

Gillham () has given Annelies Marie Frank (1929–45) the life so brutally taken from her, in the process honoring all the "Annes" who were lost in the Holocaust. In a less assured author's hands, a novel based on the premise that Frank survived the concentration camps would be in very bad taste; however, Gillham's beautifully crafted novel is a respectful tribute to the creative and passionate writer who died so young. Anne and her troubled relationship with the only other member of her family to survive, her beloved and formerly revered father "Pim," is sympathetically conveyed, as is the horrible guilt haunting the survivors. The author aims to stick to the facts as much as possible, basing the story before the annex on exhaustive research. Once Anne returns to Amsterdam after the war, Gillham brings in new characters as well as real people from Anne's diary, such as their protector Miep Gies. Frank's life thereafter is so vividly realized that readers will have to keep reminding themselves this is fiction. Highly recommended for admirers of literary historical fiction such as Kristin Hannah's and Martha Hall Kelley's [See Prepub Alert, 7/30/18.]

What if Anne Frank had survived the Holocaust? That's the premise in Gillham's well-researched yet disappointing second novel (after ), which ably depicts Anne's life prior to, during, and immediately following the time her family and others were hiding in the space above her father's workplace. Scenes of the packed train to the concentration camps; the despicable conditions she endured alongside her mother and her sister, Margot, after being separated from her father; and her final days with Margot are all harrowing. What falls short is the portrayal of Anne after she survives and comes home. An angry, guilt-burdened young woman, she hangs on to so much fury that the constant bickering with her father and everyone else in her new life become repetitive. That it takes 300 pages for Anne to learn her father has the precious diary she thought was lost forever is also a distraction. Nevertheless, as Anne comes into her own as the world-famous writer she aspired to be, Gillham skillfully traces her trajectory in handling survivor's guilt, transformed from a person fueled with rage and revenge to one who finally understands she can live her life as fully as she can and honor the dead by using her diary to teach the world about her experiences. It's a noble effort, but this novel never lives up to the promise of its premise.