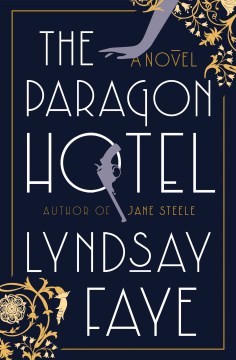 *Starred Review* Faye once again vividly illuminates history with her fiction. Here the focus is on the Mafia in New York City and the blatant racism in Portland, Oregon, during Prohibition. Half-Italian and half-Welsh Alice James, 25, known as Nobody for her ability to blend into any background, tells her story in chapters labeled Now and Then, the latter detailing her youth as the daughter of a prostitute and best friend of Nicolo Benenati, who loves but accidentally shoots Alice, wounding but not killing her. Still suffering from the wound, Alice flees on a train headed west in 1921. The Now chapters take up her arrival in Portland, where a black porter, seeing her condition, takes her to the all-black Paragon Hotel. Here, waking from anesthetic after being treated by a black doctor, she meets stunning ebony-skinned cabaret singer Blossom Fontaine, whose friendship warms her while others worry about a white woman recovering in a black hotel. The disappearance of Blossom's six-year-old mixed-race foundling fuels the Now chapters and soon activates the KKK, thriving in Portland, to deadly action, as Alice pieces together the puzzle of Blossom's past. While the violence of Mafia rule is nothing new, Oregon's deeply racist past is lesser known, and both are brought to life in this remarkably fluid fiction, framed as a love letter and based in fact. Copyright 2018 Booklist Reviews.

It's 1921, and "Nobody" Alice James is racing by rail as far from New York as possible, finally landing at the only all-black hotel in Portland, OR. Residents are understandably suspicious of this white woman—the Ku Klux Klan is in town. From the two-time Edgar nominee.

In 1921, Alice "Nobody" James, who is white, escapes her life as a New York Mafia gun moll with a bullet-shaped souvenir in her side. Hopping a train to anywhere, she meets African American train porter Max, who notes her condition and guides her to the Paragon Hotel, the only all-black hotel in Portland, OR. The owner, Dr. Pendleton, treats Alice even though it's dangerous for black men to associate with white women. So begins Alice's stay at the Paragon, where the residents have their own problems, with the Ku Klux Klan gaining popularity and dead animals left at their door. Alice uses her former skills to aid in the most heart-wrenching problem of all: finding the missing mixed-race boy Davy Lee before the Klan does. Faye ("Timothy Wilde" series; ) has meticulously researched the racial tensions and social culture of 1920s Portland, basing the Paragon Hotel on the real Golden West Hotel. Her prose is lush with details, from rich descriptions of the hotel rooms and a diva's Paris gown to citing interesting colloquialisms. A treat for those who enjoyed Faye's other novels, as well as fans of historical crime/thrillers.

Faye () takes a simultaneously exuberant and weighty approach to historical mystery in her memorable latest. It's 1921, and Alice James, known as Nobody for her uncanny ability to continually reinvent herself while remaining almost totally forgettable, arrives—complete with bullet wound—in Portland, Ore., after fleeing some bloody history with the New York mob. There, the wounded Nobody, who is white, is taken by a kind and discreet (not to mention attractive) black Pullman porter she'd befriended on the cross-country train ride to the Paragon Hotel, a haven for Portland's small and increasingly besieged black population. The black community's anxieties mount when a young boy—who's been brought up communally by the Paragon's residents—goes missing. Nobody poses as a journalist while becoming fond of the Paragon's inhabitants, particularly chanteuse Blossom Fontaine. As Nobody investigates the boy's disappearance, she is well served by her ability to observe while remaining unnoticed. Nobody gains access to Blossom's many secrets, as well as those of brilliant-but-fragile white philanthropist Evelina Vaughan, who has her own interest in the missing boy. What starts as a bit of a Prohibition-era crime romp becomes increasingly relevant as issues of mental illness, race, and gender identity take on greater significance. In addition to illuminating Portland's unsavory history of racism, Faye's novel vividly illustrates how high the stakes could—and can still—be for those claiming and defending their own identities.