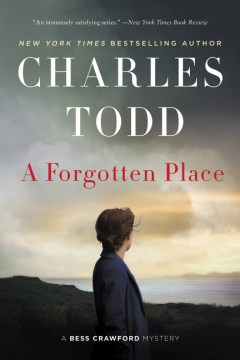 The Great War has ended. The Armistice has been signed. But the suffering continues, as soldiers come home physically and mentally scarred. Battlefield nurse Bess Crawford is working in a clinic for recuperating amputees, where she becomes involved in the efforts of the captain of a group of Welsh soldiers who is desperate to keep his men from falling into depression and suicide. After the soldiers are sent home, the captain writes to Bess, telling her that the situation has grown worse. Regular readers of this satisfyingly rich historical mystery series (this is the tenth) know that Bess Crawford is simply unable to turn away from someone who needs her help. So she travels to Wales, where she soon finds herself stranded in a remote village where the residents seem to be keeping dark secrets, and where a killer lurks. The novel has a distinctly gothic feel to it: remote locale, harsh landscape, stormy weather, mysterious villagers—and the sense that something truly evil is hiding, perhaps in plain sight. Followers of the Crawford series will find much to like here.  Copyright 2018 Booklist Reviews.

The fighting has ended, but the Great War is not over for soldiers or battlefield nurses such as Bess Crawford. The Welsh amputees she's been tending won't be able to work in the coal mines back home, and she's worried enough to follow them to their village after receiving a despairing letter from their captain. But the captain has vanished, and trying to locate him lands Bess among hostile strangers. With a 75,000-copy first printing.

Bess Crawford's tenth adventure has her once again doing her best to rehabilitate injured soldiers. This time she's nursing a group of suicidally depressed men from a remote Welsh mining village. She decides to use her precious leave to follow them home, hoping to intervene and convince their captain to put on a brave face for his men. Once she's tracked down the captain, Bess gets stranded and can only hope the ever-faithful Simon Brandon will discover where she is and rescue her. And maybe he'll help figure out why people are disappearing and what momentous secret the villagers are hiding. A typical entry in this World War I mystery series, filled with period detail but rather light on character development. Readers may become impatient with Bess's impulsive behavior, as her compassion so often gets her into trouble. [See Prepub Alert, 3/12/18.]

WWI has finally ended in Mary Higgins Clark Award–winner Todd's memorable 10th mystery featuring British nurse Bess Crawford (after 2017's ). Despite the conclusion of the fighting, Bess still has plenty of soldiers to tend to at a hospital in France—in particular, a group of Welsh soldiers, whose serious injuries make their future employment doubtful. When she's reassigned to a clinic back in England, Bess is reunited with the Welshmen, only to find several of them suicidal. Following their discharge, their leader, Capt. Hugh Williams, writes to inform her that one of the privates took his own life, and to ask for help to avert future suicides. She uses some leave to seek Williams out, ending up in a desolate and isolated town on the Welsh coast, where he's suspected of his own brother's murder. His warning that it's not safe for Bess to remain there proves prescient. The atmosphere of the claustrophobic community Bess is trapped in is palpable as Todd (the mother-and-son writing team of Caroline and Charles Todd) expertly ratchets up the suspense.