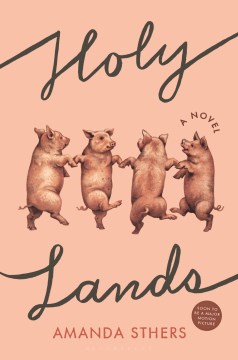 A Jewish pig farmer in Israel? This sacrilegious figure is the catalyst for best-selling French writer Sthers' comedic and sorrowful U.S. debut. Cheerfully irreverent bacon purveyor Harry Rosenmerck is an American cardiologist in flight from his past. Divorced from his French wife, Monique, who converted to Judaism to marry him; estranged from his successful playwright son, David, because David is gay; and careless of his multiple-degree-holding daughter, Annabelle, directionless in the wake of an affair with an older, married professor, Harry extends his obstinance to communication, refusing, in 2009, to have a phone or use email. Thus, the epistolary format of Sthers' quick-footed, perfectly choreographed, piercingly funny, and poignant novel. Letters fly fast and furiously to and from Harry, while the other three Rosenmercks urgently email each other. Memories, confessions, dreams, threats, and promises are issued and rebutted. The most amusing, lens-widening, and evolving exchange takes place between renegade Jew Harry and Rabbi Moshe Cattan. As each articulate, conflicted, and ardent character endures life-altering experiences, Sthers incisively and provocatively questions crucial matters of religion, morality, inheritance, compassion, and love. Copyright 2018 Booklist Reviews.

French playwright and filmmaker Sthers swerves from harshly funny to surprisingly touching in her compact epistolary English-language debut. Harry Rosenmerck, a retired cardiologist, has moved to Nazareth and started a pig farm. Because Harry lacks even a telephone, his family resorts to communicating through letters. Harry begins an acrimonious written debate with Rabbi Moshe Cattan about raising unclean animals that eventually turns to friendship. Harry's ex-wife, Monique Duchêne, who converted to Judaism for Harry, lives in New York and writes needling harangues with only hints about her declining health. Their son, David, is a successful playwright whose latest effort falls flat. He pleads for any word from Harry, having been disowned by his father since coming out, and trades jabs with his sister Annabelle. Annabelle, distraught after breaking up with a married professor, whines her way toward a visit with her father, making unplanned detours through Tel Aviv and other parts of Israel. Caustic and gentle jokes leaven the serious concerns about Israel's militarized security, Jewish identity, and the dysfunction of Harry's family. This moving novel manages a delicate balance between humor and tenderness among a family incapable of interacting without rancor.

Paris in the present tenseHelprin, Mark