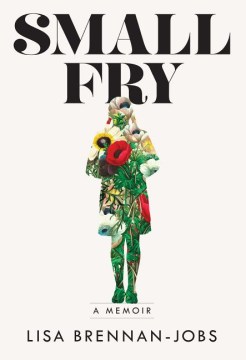 *Starred Review* When artist Chrisann Brennan told her on-again, off-again partner, Apple founder Steve Jobs, that she was pregnant with his child, he literally ran away. When the baby, who would become this book's author, was born, Jobs reappeared for just long enough to name her Lisa. After first publicly denying paternity (even after a DNA test) and being forced to pay child support, Jobs becomes a sporadic, enigmatic, and powerful presence in the author's young life. While Brennan is loving and affectionate as she struggles to provide a stable home, Jobs is awkward and distant, even as he and Brennan-Jobs become closer. The author's youthful longing for her father's approval drives this memoir. Though Jobs' rejections, from denying he named one of the first Apple computers after the author (he did) to telling her how stupid debate is after she wins a competition, can be difficult to read, Brennan-Jobs skillfully relays her past without judgement, staying true to her younger self. It is a testament to her fine writing and journalistic approach that her memoir never turns maudlin or gossipy. Rather than a celebrity biography, this is Brennan-Jobs' authentic story of growing up in two very different environments, neither of which felt quite like home. Copyright 2018 Booklist Reviews.

Like many children, Brennan-Jobs grew up caught between two parents. Unlike others, those parents were artist Chrisann Brennan and Apple-of-the-world's-eye Steve Jobs, barely there until he decided to swoop in to show her the wealthy world of private schools and big vacations. But it wasn't easy. A singular life and California in the Seventies and Eighties.

Stepping forward with her own version of her complicated relationship with father Steve Jobs, founder of Apple, debut author Brennan-Jobs adds to the Jobs lore with this distinctive memoir. Born to Chrisann Brennan, an early girlfriend of Jobs's (they met during high school and never married), the author details the adversarial and litigious relationship between her parents during her Bay Area upbringing. From her child's perspective, Jobs appeared remote but fascinating and alluring, while Brennan, although emotionally reactive, was a source of support and love. The relationship Brennan-Jobs eventually "enjoyed" with her father was never comfortable, and her position in his universe never seemed to her to be as secure as that of her stepfamily's. While some revelations about Jobs's idiosyncratic behavior might be seen as settling scores, the narrative provides unvarnished truths about the author's own actions while attempting to create a relationship with the elusive tech visionary. Jobs's many devotees will seek out this account, which deals less with innovation than with emotion. [See Prepub Alert, 3/12/18.]

In her incisive debut memoir, writer Brennan-Jobs explores her upbringing as the daughter of Apple founder Steve Jobs and Chrisann Brennan, an artist and writer (the couple never married). The book opens with Jobs's deteriorating health from cancer, but the author quickly backtracks to her early childhood, filling in details of her birth (including Jobs's initial denial of paternity, a claim debunked through DNA testing). Brennan-Jobs's narrative is tinged with awe, yearning, and disappointment. Initially, Brennan-Jobs lived with her mother, who supplemented welfare with waitressing and cleaning houses. In time, Jobs became interested in his daughter, and in high school Brennan-Jobs lived with him, becoming the go-to babysitter for his son with his wife, Laurene Powell. Later, when Brennan-Jobs declined a family trip to the circus, Jobs, citing family disloyalty, asked her to move out and stopped payment on her Harvard tuition (a kindly friend offered aid, which Jobs later repaid). Bringing the reader into the heart of the child who admired Jobs's genius, craved his love, and feared his unpredictability, Brennan-Jobs writes lucidly of happy times, as well as of her loneliness in Jobs's spacious home where he refuses to bid her good-night. On his deathbed, his apology for the past soothes, she writes, "like cool water on a burn." This sincere and disquieting portrait reveals a complex father-daughter relationship.