The president is missing : a novel / Bill Clinton, James Patterson. 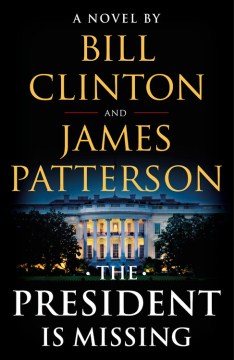 Despite the blockbuster names, it's difficult to imagine a more unlikely pairing than Patterson, known for stripping away everything but the absolute essentials from his fiction, and Clinton, a gifted orator never known for keeping it short. And while Clinton is certainly not the first high-level politician to write fiction (or, if we count Donald Trump's Trump Tower, even the first president to receive a coauthor credit for a potboiler), the appearance of this high-profile, commercial thriller (jointly published by Knopf and Little, Brown), is certainly a landmark moment. But does it deserve a place on a shelf in Clinton's presidential library? Though the plot is convoluted, the premise is straightforward: a terrorist group, Sons of Jihad, led by one Suliman Cindoruk, is threatening to unleash a computer virus that could almost literally return the U.S. to the Dark Ages. President Jonathan Lincoln Duncan, battling the threat of impeachment, receives an offer to negotiate in person—and, donning a disguise and shedding his security detail, meets a shadowy figure at a Washington Nationals baseball game, just before all hell breaks loose. Patterson ensures the plot purrs like a finely tuned machine, from the ticking clock of imminent disaster to suspenseful health complications (Duncan suffers from a blood disease that threatens to drop him at any moment), to an intrepid assassin completing the archetypal one last job. Clinton's input makes the executive experience plausible and effectively conveys the weight of the presidency, from diplomatic negotiations to Secret Service protocol, to mundane observations, such as, "I haven't opened my own car door for a decade." Was there an unnamed co-conspirator on hand to do the actual typing? Well, that's classified, but there surely was a lot of typing, as this tops out at more than 500 pages of tense negotiations, firefights, chase scenes, and betrayals. (Do you really think the jihadists were the only ones behind it?) All must take responsibility for the prose, which includes such gems as, "the mental gymnastics I have to perform while defending myself with one hand tied behind my back." Some readers may be disappointed that the premise inherent in the title is a bit of a head fake, and the battle-hardened Duncan doesn't really go off the grid to tangle with the bad guys mano a mano. But what does happen is ultimately more plausible. Comparing narrators to authors is a fool's errand, but when an ex-president is writing about a sitting president whose name is rhythmically similar—in first-person, present-tense, no less—it's also irresistible. The widowed Duncan (draw your own conclusions) is a former stud baseball player, a war hero (an Airborne Ranger in Desert Storm, he was captured and tortured), and a southern Democrat who is facing a real threat of impeachment by a powerful speaker of the house for a misunderstood but noble reason he can't disclose. Supporting characters constantly remind us of Duncan's courage, sparing him the hassle—but, despite all that, he's just a regular guy at heart. Clinton doesn't help us steer clear of comparisons, for it's his voice we hear as the narrator whopops up time and again to justify his actions in the face of ignorant opposition, to opine on the state of the republic, to offer geopolitical lessons, and to remind us just how much he feels everyone's pain. Even after the dust has settled, the podium hound can't resist the opportunity for one last State of the Union speech. It's easy to imagine the high-level diplomatic negotiations as Patterson tries, with limited success, to keep his verbose partner in check. One of the half-dozen dedications is, "To Hillary Clinton, who has lived with and worked against this threat and the consequences of unheeded warnings . . . ." Is this book intended to be a real caution about a serious threat? If so, it's a curious vehicle, but perhaps appropriate to the time in which we live. Half thriller, half policy primer, this is a strangely compelling addition to Clinton's presidential papers. Copyright 2018 Booklist Reviews.

Here's a big collaboration: the former U.S. president joins with the author who holds the record for the most No. 1 best sellers for a thriller about the disappearance of POTUS from the stringently guarded White House.