Summer hours at the Robbers Library : a novel / Sue Halpern. 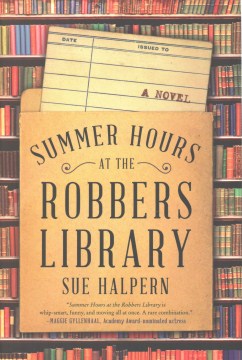 *Starred Review* Halpern (A Dog Walks into a Nursing Home, 2013), a master of precise, warmhearted creative nonfiction and a discerning and sensitive novelist, infuses this tale of derailments and second chances with free-ranging empathy, lithe humor, and penetrating insights into the human psyche. Riverton, New Hampshire, is a financially depleted, increasingly dingy small town grateful for its anchoring library, one of 1,687 constructed by Andrew Carnegie. Folks call it the Robbers Library not only because Carnegie was one of the so-called robber barons who sought redemption through enlightened philanthropy, but also because the man who built the mills that once sustained the town and who also contributed to the library was named Albert Robers, which just begs for that extra b. Speaking of robbery, Sunny, 15, whose birth name is Solstice, and who is being haphazardly raised and "no-schooled" by secretive, determinedly off-the-grid, Rainbow Gathering parents, is caught attempting to steal a big, fancy dictionary. Intrigued by her unusual crime, the judge comes up with the perfect punishment: Sunny is sentenced to a full summer of community service at the Robbers Library. The library director briskly hands Sunny over to the reference librarian, Kit, who is fairly new in town and hardly thrilled about this disruptive responsibility. Profoundly and purposefully solitary, Kit carefully conceals her traumatic past, which Halpern slowly and strategically reveals in captivating flashbacks. Kit and Sunny warily size each other up as they work together, and Kit's hard shell soon begins to soften in the glow of Sunny's energy, curiosity, and pleasure in being surrounded not only by books but also by people. Hers, we learn, has been a strange and isolating life. Headquarters for the Four, a quartet of friendly, funny, bright, and observant older men, the pillars of the town, the library also becomes the base of operations for a mysterious, good-looking, seemingly prosperous man who spends all day on the computer. Halpern discloses his past, too: Rusty was a mega-rich Wall Street power player who lost it all except for his Mercedes, his stylish clothes, and his mother's old bank book, which led him to Riverton, where he's anxiously researching the town's history. In each story line, Halpern subtly tests our assumptions about self, love, marriage, family, vocation, and ethics, both personal and communal. Along the way, she offers a realistic view of the struggles and triumphs of a small public library, while framing it as a safe place in which to search for answers and solace. Halpern's unsentimental portrayal of the library as both refuge and a place of illumination and inspiration harmonizes well with that of Rebecca Makkai in The Borrower (2011), John Irving in In One Person (2012), and Howard Norman in My Darling Detective (2017). The adversity-defined perspectives and piquant senses of humor possessed by Halpern's irresistible characters shape this inclusively appealing novel's searingly candid yet ultimately benevolent worldview. Finely choreographed and lucidly told, Halpern's uplifting tale peers into suffering both random and inflicted with malice, then works its way with wisdom and charm to an unfazed celebration of supportive communities—epicenters of kindness and teasing, skepticism and respect, nosiness and generosity, backed by a low-key affirmation of just how essential public libraries—oases, bedrocks, incubators, launching pads—are to our lives, our democracy, and our future. Copyright 2017 Booklist Reviews.

Back when Andrew Carnegie was building public libraries in every city across America, the town of Riverton, NH, had its own mogul, whose name was Robers, which morphed into "Robbers" through probably equal parts humor and resentment. The town barely hangs on, but the library is now its best-maintained building. Halpern () brings together three oddball characters in this setting and follows them through their encounters with multiple points of view. There is librarian Kit, fresh from therapy following marriage to a controlling monster, Solstice (Sunny), a teenager whose parents live off the grid and hide a secret past, and Rusty, a fugitive from Wall Street. When Sunny is assigned community service at the library after being arrested for shoplifting, she soon connects with Kit and Rusty. Fans of Felicity Hayes-McCoy's will be taken with this beautifully written novel with appealing characters. Given that the author's plot line stretches typical library policy a bit, it's bound to stir some lively book-club discussions about public libraries and their operations.