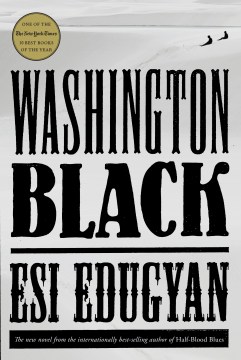 *Starred Review* ?The year 1830 finds 12-year-old George Washington ("Wash") Black enslaved on a sugar plantation in Barbados. His life changes dramatically when his master's younger brother, Titch, chooses him to assist with Titch's scientific experiments. When an innocent Wash is in danger of being charged with a death, he and Titch flee in a hot-air balloon of Titch's design. The balloon comes to ruin, but the two survive to journey to the Arctic, where they hope to determine if Titch's renowned scientist father is still alive. It is there that Titch abandons Wash. The boy, by now 13 and a gifted artist, makes his way to Nova Scotia where he meets the daughter of an eminent zoologist. The three journey to London where Wash begins to make it his business to find Titch, if he is still alive. There is something ineffable about Wash's subsequent search, just as there is a wonderful strangeness to the story, which Wash tells in his own eloquent and even aphoristic voice ("Nothing is possible until it is made so"). The story is memorable not only in its voice but also in its evocation of the horrors of slavery; and it is brilliant, too, in its construction of character. Wash and Titch are so alive as to be unforgettable, as is the story of their tangled relationship. This important novel from the author of the superb Half-Blood Blues (2012) belongs in every library. Copyright 2018 Booklist Reviews.

Working in the sticky heat of the Barbados sugar plantation where he was born, 11-year-old field slave Washington Black is terrified when he's made manservant to his master's offbeat brother. But naturalist/explorer Wilde, or "Titch," eagerly introduces Wash to a brave new world and protects him when a bounty is placed on his head, as they flee north along America's Atlantic coast to the chilly Arctic. But in their world, can friendship last? From the author of the international best seller , winner of the Scotiabank Giller Prize and short-listed for the Man Booker Prize.

Much has been written recently about the vulnerability of the black body; think of the essays of Ta-Nehisi Coates or Roxane Gay. Canadian author Edugyan probes this subject through a remarkable coming-of-age story. Enslaved on a sugar plantation in Barbados, young George Washington Black lives a life so circumscribed that he's not even allowed to end it. Rescued from back-breaking work in the fields by amateur scientist Christopher "Titch" Wilde, nephew of the estate owner, Washington Black is schooled in math, English, and astronomy, discovering a penchant for illustration. For the next decade, he will wonder why he was chosen. Why, after they flee the island and at each stop along their picaresque journey to Virginia and on to an Arctic outpost, does Titch try to detach from the weight of Wash's need? Though physically free, Wash is never comfortable in his own black skin, and though he achieves a modicum of happiness, he will always be shackled to his past until he can fully understand it. Edugyan, whose was a finalist for the Orange and Man Booker prizes and won the Scotiabank Giller Prize, delivers a vibrant, poignant tale of a man's search for selfhood in a world where some see him as less than whole. [See Prepub Alert, 3/26/18.]

Edugyan's magnificent third novel (after ) again demonstrates her range and gifts. Eleven-year-old slave George Washington Black cuts sugar cane on a Barbados plantation owned by a sadistic Englishman named Erasmus Wilde until Wilde's scientist brother, Titch, visits in 1830 to work on the experimental airship he calls Cloud-cutter. Titch makes Wash his servant because the boy's weight makes suitable ballast for Cloud-cutter, teaches Wash to read, and nurtures his gift for scientific thought and illustration. As Wash is transformed—and confused—by Titch's tutelage, Erasmus becomes increasingly punitive toward him. Titch, afraid for his protégé's life, devises a risky nighttime escape on Cloud-cutter, which collides with the masts of a ship bound for Virginia. After arriving there, the two head northward, getting as far as the Arctic before Titch, insisting that Wash stay behind, strikes out into the snow for reasons Wash cannot understand. Not knowing whether Titch is alive or dead, Wash continues his travels and scientific work. But he feels compelled to find out Titch's fate and learn why his mentor rejected him. Framing the story with rich evocations of the era's science and the world it studies, Edugyan mines the tensions between individual goodwill and systemic oppression, belonging and exclusion, wonder and terror, and human and natural order. The novel's patience feels essential: the characters' many passages from painful endings to tentative rebirths are necessarily slow and searching. Crafted in supple, nuanced prose, Edugyan's novel is both searing and beautiful.