Fruit of the drunken tree : a novel / Ingrid Rojas Contreras. 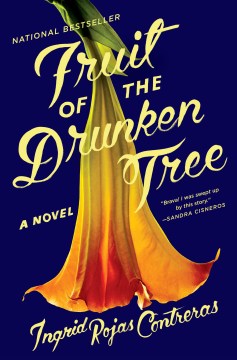 *Starred Review* In this incomparable debut novel, Contreras draws on her own experience growing up in turbulent 1990s Bogotá, Colombia, amid the violence and social instability fueled by Pablo Escobar's narcotics trafficking. In vividly rendered prose, textured with generous Spanish, Contreras tells the story of an unlikely bond between two girls on the verge of womanhood: Chula, the daughter of a middle-class family, and Petrona, the teenager hired to serve as the family's maid. While Chula's family can afford to protect themselves behind the suburban walls of a gated community, Petrona must support her many siblings as they struggle to survive the inner-city slums. Despite their differences, and driven by Chula's curiosity about Petrona's odd habits, the two become inseparably close until decisions must be made that will alter their futures forever. Contreras' deeply personal connection to the setting lends every scene a vital authenticity, and a seemingly unlimited reservoir of striking details brings the action to life, like the trumpets and accordions on Christmas Eve, or the messy Afro of Petrona's suspicious new boyfriend. A riveting, powerful, and fascinating first novel. Copyright 2018 Booklist Reviews.

Based on the author's experiences growing up in drug war-torn Bógota in the late 1980s and early 1990s, this moving story is told in the dreamlike voice of seven-year-old Chula, who lives with her sister, Cassandra, and their proud, personable mother in a rich neighborhood while their father is away working in an oil field. Then 13-year-old Petrona, whose now poverty-stricken family was ripped apart by guerillas, comes to work for them. Enamored of Petrona, Chula sets out to discover all she can about the girl and her new, dangerous boyfriend, no matter the cost to her own safety. Young Chula also harbors morbid fascinations with bloody tales of local car bombings and follows politics with as much fervor as she does telenovelas. Rojas Contreras's narrative presents a Colombia different from that portrayed in popular media, such as Netflix's . She does an excellent job of articulating the complicated political situation and illustrating the heartbreaking day-to-day reality for children. A fascinating, poetic read from an up-and-coming author. For fans of literary fiction and libraries with immigrant communities. [See Prepub Alert, 1/8/18.]

Already the winner of several honors (e.g., a Bread Loaf Bakeless Camargo Fellowship), Bogotá-born Rojas Contreras draws on her own life to chronicle the relationship between seven-year-old Chula, sheltered within her gated community from the violence of 1990s Colombia, and the family's new teenage maid.

Rojas Contreras packs her coming-of-age debut full of details about life in early 1990s Colombia during the last year of Pablo Escobar's reign of terror. Seven-year-old Chula's sheltered life in a gated community with her mother and older sister Cassandra cracks open with the arrival of 13-year-old maid Petrona. Petrona comes from a nearby shanty town and fascinates the implausibly precocious Chula, whose greatest excitements are spying on the richest lady in their neighborhood and hunting ghosts. Chula's formidable mother, Alma, grew up in a slum and copes with standoffish and judgmental well-heeled neighbors while her husband works in the oil fields. The family temporarily flees to Alma's home village to escape Bogotá's escalating violence, while Chula and Petrona get drawn into a situation that will eventually pose a dire threat. Chula's fixation on the news allows smooth introduction of the historical events surrounding Colombia's instability and Escobar's eventual death. The skeletal chapters from Petrona's perspective provide some belated explanations for the danger she exposed the family to. This striking novel offers an atmospheric journey into the narrow choices for even a wealthy family as society crumbles around them.