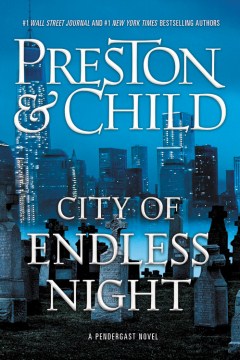 After a lengthy sojourn to far-flung locales in previous novels in this popular series, FBI special agent Aloysius Pendergast finally returns to New York City, where he quickly becomes embroiled in a murder case involving the daughter of a billionaire tech innovator. Because it's an NYPD case, Pendergast teams up with his old friend Lieutenant Vincent D'Agosta, who hasn't had a major appearance in the series in a few years (and it's very nice to have him back). Well, soon enough, what appears to be a lone homicide is revealed to be a small part of a much bigger picture, and Pendergast and D'Agosta are in grave danger. As always, the authors have crafted a story that is almost impossible to pull away from, and their prose is as elegant as fans have come to expect. Pendergast continues to be one of thrillerdom's most exciting and intriguing series leads, and the series remains among the most reliable in the genre. Copyright 2017 Booklist Reviews.

With New York City overrun by a serial killer who decapitates his victims—notably, the daughter of a wealthy tech billionaire—Lt. CDS Vincent D'Agosta is especially happy when FBI Special Agent A.X.L. Pendergast is assigned to the case. With a 250,000-copy first printing.

In his 17th outing (after ), FBI special agent Aloysius Pendergast, along with his friend NYPD Lieutenant Vincent D'Agosta, tackles yet another twisted, multiple-murder case but this time featuring horrifying decapitations. Grace Ozmian, daughter of a high-tech billionaire, is the first to be killed, but unlike her successor victims, her head was apparently removed from her corpse more than 24 hours after her death. As the subsequent bodies (and severed heads) pile up, the pot is further stirred by local reporter Bryce Harriman, who manages to stoke fear and panic in New York City, eventually bringing out a range of demonstrators and protesters, from the violent to the religious, the latter of whom stage a modern "Bonfire of the Vanities" in Central Park to expiate the city of its sins. All of which puts extreme pressure on the police and the FBI to solve the case, and pronto. Fans of the "Pendergast" series will be delighted with this latest romp and its careful plotting and suspense should appeal to mystery fans generally as well. The sensational details don't interfere at all with its plausibility and stylishness. [See Prepub Alert, 7/24/17.]

Why would a killer decapitate his victims? That's one of the puzzles Preston and Child pose for their eccentric FBI agent with expensive tastes, Aloysius Pendergast, and his loyal NYPD ally, Lt. Cmdr. Vincent D'Agosta, in the lackluster 17th entry in this bestselling series (after 2016's ). In Kew Gardens, Queens, two boys stumble on a headless woman in a garage. Fingerprinting identifies the body as that of Grace Ozmian, the missing 23-year-old daughter of tech billionaire Anton Ozmian. Before much traction can be made on Grace's case, more people are murdered and decapitated, including a prosecutor turned mob lawyer and a Russian oligarch. There's no obvious motive for the killings, and D'Agosta feels pressure from New York City's mayor to come up with answers. Though the minimization of Pendergast's complex backstory makes this entry more accessible to newcomers, the authors fail to generate their usual high level of suspense. The climax will strike fans as too familiar.