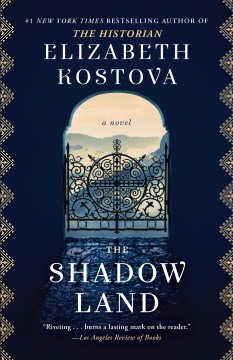 On her first day in Bulgaria, American Alexandra Boyd acquires the ashes of violinist Stoyan Lazarov when she encounters a trio of Bulgarians and inadvertently keeps their bag. Boyd searches the country for Lazarov's family while sinister forces attempt to prevent her from exposing devastating truths. Occasionally reading like a travelogue, this novel is replete with extensive character description and authorial flourish. The pacing is leisurely, with recurring visits to previously encountered locales and expository characters, before a dénouement that carefully threads together and ties off all story lines. Historical detail and a dual-time-period narrative is achieved with Lazarov's memoir of 1950s Communist Bulgaria, a tale strongly reminiscent of Holocaust fiction, adding appeal for fans of that genre. Kostova's phenomenally successful debut, The Historian (2005), was an international, period-jumping, doorstop literary thriller that relied heavily on epistolary elements. Her second novel, The Swan Thieves (2010), followed structural suit, and after seven years, her highly anticipated latest stays true to an exceedingly appealing pattern. Recommend Kostova's latest to readers seeking outstanding and suspenseful historical fiction. HIGH-DEMAND BACKSTORY: Substantial prepublication buzz about best-selling Kostova makes this a must-buy for fiction collections. Copyright 2017 Booklist Reviews.

Alexandra, an American in her mid-20s, has decided to start life anew in Bulgaria. Soon after she lands in Sofia, her plans go awry when she discovers a stranger's bag among her own. Even more troubling, inside the bag is a box of cremated remains. While attempting to return the box, Alexandra becomes embroiled in a mystery that encompasses Bulgarian history from before World War II to the Bulgarian coup d'état of 1944 that led to a communist state and through the present. On her adventure through the Bulgarian countryside, she is accompanied by an enigmatic taxi driver and meets many other interesting, rich characters. This third novel from Kostova () will delight the author's fans. A slight hint of the mystical will appeal to readers who enjoyed Deborah Harkness's "All Souls" trilogy, while the mystery and thriller aspects will keep fans of Dan Brown and Umberto Eco reading. A fantastic book club pick. [See Prepub Alert, 10/17/16.]

This third novel from the author of the best-selling finds a young American woman in Sofia, Bulgaria, helping a family into a taxi and realizing too late that she has kept one of their bags. The bag contains an ash-filled urn labeled Stoyan Lazarov, which leads our heroine to a particularly dark moment in Bulgarian history. With an eight-city tour.

A compelling and complex mystery, strong storytelling, and lyrical writing combine for an engrossing read set in the former Soviet-bloc nation of Bulgaria. Not long after Alexandra Boyd's 2008 arrival in Sofia to teach English, she ends up with the wrong suitcase, which holds the remains of one Stoyan Lazarov in a carved box. She is determined to return it to the elderly couple traveling with their son, a handsome man who eventually haunts her dreams. Helping her on this quest is Asparuh Iliev, aka Bobby, an inscrutable taxi driver who believes in his nation's beauty but fears for its future under the possible leadership of a powerful and wealthy politician whose anticorruption campaign is gaining political traction. They learn Lazarov was a talented violinist who faced political oppression. A parallel story line tells of Lazarov's life. His attempt to become a concertmaster by currying favor with his orchestra's Communist conductor has tragic consequences, setting up Kostova's () most emotional and harrowing moments. (Apr.)