Turtles all the way down / John Green. 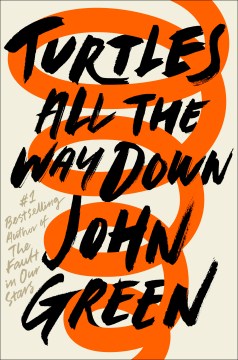 *Starred Review* It's here: the eagerly awaited new novel by John Green, and—not to milk the suspense—it's superb. High-school junior Aza has an obsessive fear of being infected with the bacteria Clostridium difficile ("C. diff"), which can be fatal. Her fear has become obsession, plaguing her with "intrusives," thoughts that take over her mind, making her feel that she is not the author of her own life. She does, however, have a life: her father is dead; her mother is a teacher; her best friends are Mychal, a gifted artist, and Daisy, a well-known Star Wars fan-fiction author. To their trio is added Davis, whom Aza had known when they were 11. Davis' billionaire father has decamped, pursued by the police, leaving Davis and his younger brother parentless (their mother is dead) and very much on their own. How will the friends cope with all this? And how will Aza cope with her own problems? Green, a master of deeply felt material, handles all of this with aplomb. With its attention to ideas and trademark introspection, it's a challenging but richly rewarding read. It is also the most mature of Green's work to date and deserving of all the accolades that are sure to come its way.HIGH-DEMAND BACKSTORY: The only question is, how many shelves worth of copies can your library fit? You'll need all of them. Copyright 2017 Booklist Reviews.

Sixteen-year-old Aza Holmes suffers from obsessive compulsions, anxiety, and "invasive" thought-spirals. She's also investigating the whereabouts of missing local billionaire Russell Pickett, which leads her to Pickett's son Davis, Aza's childhood friend. The mystery and tentative romance give the story momentum and shape, but its epicenter is a clear-eyed exploration of mental illness and of the deep existential revelations that suffering can engender. Copyright 2018 Horn Book Guide Reviews.

Five years after The Fault in Our Stars (rev. 3/12), Green returns to chart a different kind of debilitating illness. When we meet sixteen-year-old Aza Holmes in the cafeteria, her thoughts are laser-focused on her body's microbiome: "Admittedly, I have some anxiety problems, but I would argue it isn't irrational to be concerned about the fact that you are a skin-encased bacterial colony." Aza's obsessive compulsions, anxiety, and "invasive" thought-spirals only grow from there. Note-perfect narration--which seamlessly switches from first- to second-person during panic attacks--makes what should be objectively irrational seem relatable, even logical; readers' empathy with Aza continues to grow throughout the story. But Turtles is also a mystery and a romance. Aza and her vivacious best friend, Daisy Ramirez, investigate the whereabouts of local billionaire Russell Pickett, who's running from criminal charges. Their sleuthing leads to Pickett's son Davis, Aza's childhood friend from "Sad Camp" (his mother had died, as had Aza's father). The stars don't seem aligned as Aza begins a tentative romance with kind, introspective Davis: her mental health deteriorates, and he struggles with being a guardian to his grief-stricken younger brother. These plot lines give the story momentum and shape, but its epicenter is a clear-eyed exploration of mental illness and of the deep existential revelations that suffering can engender. Green has proven himself a master manipulator of readers' feelings, but he is, as ever, benevolent in that role. What readers may shed in tears is repaid in hope, spiritual curiosity, and a deeper connection to the human experience. katrina Hedeen Copyright 2017 Horn Book Magazine Reviews.