My name is Venus Black : a novel / Heather Lloyd. 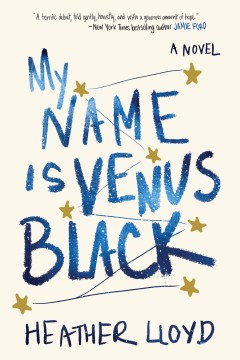 Lloyd's debut novel is charming, touching, and a host of other adjectives not often associated with a murderous 13-year-old. The book's ominous opening skips over how and why Venus Black killed her stepfather, cutting straight to the teenage protagonist landing in juvie. Days later, her seven-year-old autistic brother, Leo, is kidnapped. The siblings' mother, Inez, is suddenly without husband, daughter, or son. Through multiple perspectives, Lloyd tracks the Black family's separate paths over the next six years. Ex-con Venus seeks a fresh start with a new identity, but she struggles with the enormity of freedom. Grief-stricken Inez refuses to give up on either of her lost children, and routine-driven Leo is a victim of circumstance and a life thrown out of orbit. Lloyd's extraordinary plot is grounded in the complex, palpable emotions she exacts from her beautifully realized, heartwarming characters. A culminating series of reunions illuminate their richness and humanity as they confront guilt, blame, and forgiveness. Lloyd's vivid, superbly crafted novel will have wide appeal. Copyright 2018 Booklist Reviews.

Readers first meet Venus Black, age 13, in 1980 Washington State, as she is locked up in juvenile detention after a horrific event involving her stepfather, Raymond. The only positive aspect of her self-absorbed mother Inez's marriage to Ray is her developmentally disabled stepbrother Leo, whom Venus loves fiercely. Venus committed her crime out of a desperate attempt to ensure Leo's and her own safety. A few days after she is incarcerated, Leo disappears. Six years later, at age 19, Venus is released, determined to start over under an assumed name. She rents a room from Mike and grudgingly agrees to babysit his precocious nine-year-old niece, Piper, whom she eventually comes to love like a sister. When Piper moves away, Venus decides to find Leo, no matter the cost to herself or Inez. During her search, she also meets Danny, a determined cop who loves her despite her troubled past. Fans of realistic coming-of-age fiction will enjoy Lloyd's fast-paced first novel for the freshly drawn original characters, compelling story line, and beautiful tribute to the healing power of love. It's bound to have crossover appeal to older YA readers.

Lloyd's moving debut explores the reverberations of a crime and its aftermath for a teen girl and her family. Venus Black is 13 years old, a seemingly normal teen and good student, when she shoots and kills her stepfather Raymond and is sent to prison. Venus won't talk about why she committed the crime. Shortly after, her developmentally disabled little brother, Leo, to whom she is very close, goes missing. In 1986, at 19, Venus is released, and she's desperate to start over. Taking a new name, she makes a life for herself in Seattle, attracting the eye of a local cop, Danny, and befriending her landlord's nine-year-old niece, Piper, but thoughts of Leo still haunt her. Not knowing whether he's alive or dead is excruciating, and her overbearing mother, Inez, desperately wants to make amends for the events that led to the shooting. Just as Venus gets settled, information comes to light about Leo's disappearance that threatens her delicately balanced new life. Lloyd portrays Leo sensitively and adroitly brings the resilient Venus to life, but the narrative is marred at times by clunky prose and too-neat solutions. Still, this is a satisfying tale about family, forgiveness, and moving on, and will have crossover appeal for older teens. Agent: Jane von Mehren, Aevitas Creative. (Feb.)