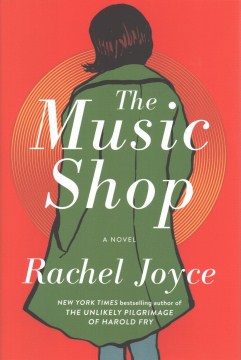 Like the long-past heyday of London's Unity Street, its shops and shopkeepers are also well past their prime, their relevancy revoked in the names of progress and technology. Foremost among them is Frank, his shop jammed with an esoteric collection of vinyl records: no CDs allowed! His knowledge of music is nuanced and deep, a gift from his unconventional mother, who imparted life lessons through listening sessions devoted to everyone from Vivaldi to Miles Davis. Frank has a knack for giving his customers exactly what they're looking for, even when they don't know what that is. Aretha for a brokenhearted bridegroom; Samuel Barber's "Adagio for Strings" for a tough tattoo artist. Frank's biggest challenge comes in the form of a frail young woman, Ilse Brauchmann, who hires him to teach her how to listen to music. Whether on foot, as in her novel The Unlikely Pilgrimage of Harold Fry (2012), or track by track, on this unlikely musical odyssey, Joyce (The Love Song of Miss Queenie Hennessy, 2015) excels in enveloping readers in epic journeys of lost connections and loving reunions. Copyright 2017 Booklist Reviews.

Best-selling author Joyce first boomed big with the Man Booker long-listed The Unlikely Pilgrimage of Harold Fry, which was swiftly followed by the LibraryReads pick The Love Song of Miss Queenie Hennessy. Set in 1988, her new title features record store owner Frank, who can find exactly the record each customer needs among vinyl-only merchandise ranging from classical to punk. Quiet and questing, Ilse Brauchmann is a different sort of customer altogether; she wants Frank to tell her about music itself.

In 1988, shop owner Frank is a kind of vinyl-only music whisperer. People come into his store and tell him their troubles. He listens and sends them into one of his homemade listening booths to hear just the right track (jazz, rock, classical) that cures what ails them. Frank and his fellow business owners, a close-knit, ragtag group hanging on in their cul-de-sac to a vanishing way of life, are being pressured by developers to sell and get out. Then Ilsa Brauchmann literally falls into their lives when she passes out in front of the music shop. These gentle, damaged people find common ground in the weekly lessons about music Frank gives to Ilsa, and there's instant attraction, as his boundless knowledge of music both charms and terrifies her. Misunderstandings, missed opportunities, and a catastrophic accident threaten the fragile bonds that begin to draw them together. Joyce, a British actress and playwright, whose first novel, , was longlisted for the Man Booker, continues to enchant and break hearts with her lovable misfits trying to survive in a modern world determined to pass them by. Irresistible. [See Prepub Alert, 7/3/17.]

Joyce () has a winner in this deceptively simple love story about Frank, owner of a London hole-in-the-wall music store selling vinyl records in 1988. Adamant about not selling cassette tapes or CDs, Frank is a loner raised by an eccentric but loving mother who taught him to cherish all kinds of music. His extraordinary gift is knowing the precise song people need to hear at a particular time in their lives, and his musical selections have miraculous results. Frank's small circle of friends own shops on this out-of-the-way street: Maud, who secretly pines for Frank, has a tattoo parlor; ex-priest Father Anthony sells religious artifacts; the twin Williams brothers run a family funeral business. Frank's life is upturned when a mysterious stranger, Ilse Brauchmann, appears outside his store and promptly faints. The magical trajectory of Frank and Ilse's relationship is nicely balanced against the thread about a threatening real estate company that wants to destroy Frank's tiny store. Joyce's odes to music—from Aretha Franklin and J.S. Bach to Puccini and the Sex Pistols—and the notion that the perfect song can transform one's life make this novel a triumph.

Ellie and the harpmakerPrior, Hazel

Redhead by the side of the roadTyler, Anne

A visit from the Goon SquadEgan, Jennifer