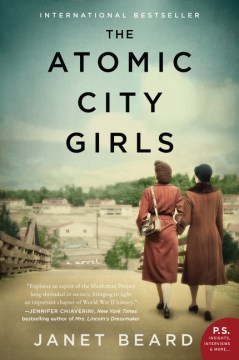 *Starred Review* In the WWII race to beat the Nazis to the atomic bomb, the Manhattan Project was formed; in Oak Ridge, Tennessee, a gated city sprang up to produce the requisite uranium. Beard's second historical novel (Beneath the Pines, 2008) tells the story of that city through the eyes of four interrelated characters. Local teen June Walker, working her first job, rooms with Cici Roberts, born poor but determined to fix this through a rich marriage. Sam Cantor is a lead scientist working at Oak Ridge, and Joe Brewer works on construction of the city while living in the city's inferior, segregated area. These distinct perspectives allow a glimpse at the social hierarchy of Oak Ridge as well as the work done there—for the most part by people who did not know what, exactly, they were working on. Beard has taken a project of momentous impact and injected a human element into it. The workers at Oak Ridge struggle with emotional issues, like love and jealousy, as well as societal ones, like segregation and the moral dilemma of creating a bomb made for wide-scale destruction. This is approachable, intelligent, and highly satisfying historical fiction. Copyright 2017 Booklist Reviews.

Beard (Beneath the Pines) tells the story of the women who worked at the Oak Ridge, TN, production site for the Manhattan Project by focusing on 18-year-old June Walker. The women know nothing about their assignment, and June contents herself with socializing (even launching an affair with a young Jewish physicist) until a security breach compels her to start asking questions. With a 100,000-copy first printing.

In 1944, the town of Oak Ridge, TN, doesn't technically exist, yet it is home to thousands of workers racing to build the first atomic bomb. Beard's () new historical novel focuses on the little-known realities behind the Manhattan Project. The production facility is a nice place to live and work for white country girls wanting good wages, but it's a slum with atrocious living conditions for segregated black workers. Eighteen-year-old farm girl June Walker is thrilled to be at Oak Ridge, but she doesn't know the true purpose of her work and is warned never to discuss details. Her affair with physicist Sam Cantor and his drunken slip of the tongue about the bomb test her loyalty. In exchange for higher wages, construction worker Joe Brewer endures substandard accommodations, separation from his family, and a tragedy that strikes a young friend fighting for equal rights. America's fight for freedom and dignity across the globe is sharply contrasted with blatant racism and injustice at home. Readers who enjoyed Martha Hall Kelly's will appreciate this glimpse into the beliefs and attitudes that shaped America during World War II. [See Prepub Alert, 8/28/17.]

Beard's satisfying second novel (after ) gives a human dimension to the lesser-known true-life events that took place in Oak Ridge, Tenn., during World War II. Eighteen-year-old June Walker leaves her family and simple upbringing behind to work at the brand-new Oak Ridge facility (where security is tight and breaches aren't tolerated), learning to turn dials on machines whose function she doesn't understand. Her roommate, the glamorous Cici Roberts, makes finding a husband her priority. In the bare-bones segregated hutments that house African-American workers, Joe Brewer works tirelessly while pining for his family back home. Meanwhile, June starts a romance with physicist Sam Cantor, who is working to produce uranium for the atomic bomb being developed in Los Alamos. As June learns more about the project, she must reconcile her own part in it with her love for the increasingly volatile Sam, who comes from a very different world. Beard's fascinating narrative brings to life four people with different outlooks and dreams whose fates memorably intertwine.