The grave's a fine and private place / Alan Bradley. 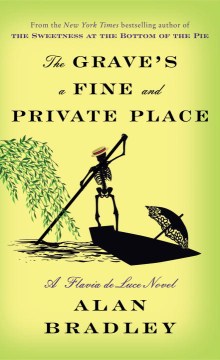 Who but Flavia de Luce could dangle her hand in the river on a boating outing and hook a human corpse in the mouth? Death seems to follow the 12-year-old chemist-sleuth everywhere, even on this excursion planned by longtime family servant Arthur Dogger as a diversion for a household still grieving the unexpected death of the de Luce patriarch. The body turns out to be that of actor Orlando Whitbred, son of the canon hanged for murdering three elderly ladies by serving them communion wine laced with cyanide. Surreptitiously, Flavia retrieves fluids from Orlando's lungs and a puzzling note from his pocket. Then, in league with Dogger, Flavia is out to determine how Orlando died, and—while she's at that—to look into the canon's crimes, too. Relationships with her two difficult older sisters improve, with literary Daphne interpreting pertinent poetry for Flavia, and Ophelia and her fiancé coming to the young sleuth's rescue in the nick of time. A promising partnership is ahead for the irrepressible Flavia, whose cozy escapades hold appeal for all ages. Copyright 2017 Booklist Reviews.

Acerbically smart young sleuth Flavia de Luce is back, ready to take another crack at the LibraryReads Top Ten list and perhaps grab more honors to add to the Debut Dagger, Barry, Agatha, Macavity, Dilys, and Arthur Ellis awards that Bradley has collected on her behalf. Here, Flavia is punting lazily along the river with her family when she discovers a corpse dressed in blue silk and wearing a single red ballet slipper. How the victim is connected to the death of three local gossips, the son of an executed killer, a traveling circus, and a publican's talented wife is for Flavia—and readers everywhere—to find out.

Flavia de Luce, the 12-year-old genius who loves chemistry and murder investigations, is mourning her father's death by spending summer days floating down the river with her sisters and Dogger, the family factotum. As Flavia idly discusses a recent poisoning with Dogger, she drags her hand in the water and catches her fingers in the teeth of a skull. The victim is identified as the son of the notorious Canon Whitbread, who had been hanged for poisoning three women during a church service. As usual, Flavia throws herself into the investigation, using her scientific knowledge and curiosity to endanger herself. There's only one Flavia, the precocious amateur sleuth caught between childhood innocence and book knowledge. This ninth adventure (following ) seems to bring an end to one story line as the three sisters and Dogger are prepared to move on with their lives. Series fans will anticipate the details of this investigation, along with one last taste of Flavia's unorthodox family life. [See Prepub Alert, 7/3/17.]

Set in England in 1952, Agatha-winner Bradley's outstanding ninth Flavia de Luce novel (after 2016's ) finds 12-year-old Flavia contemplating suicide in the wake of a family tragedy. To relieve the increased tension between Flavia and her two older sisters, Dogger, the de Luce family's long-serving and devoted servant, proposes an extended boat trip on the river. All is uneventful until the skiff nears the site where a notorious poisoner, Canon Whitbread, discarded the chalice he used in his crimes. Flavia's hand, trailing behind the boat, comes into contact with the corpse of the canon's son, Orlando. Unperturbed, Flavia uses her handkerchief to swab liquid from the dead man's lips, and she and Dogger jury-rig a forensic lab to examine the sample. Though disappointed when the evidence shows Orlando was drowned instead of poisoned, Flavia persists with her amateur detecting, even as she runs afoul of the local constable. As usual, Bradley makes his improbable series conceit work and relieves the plot's inherent darkness with clever humor. Agent: Denise Bukowski, Bukowski Agency. (Jan.)