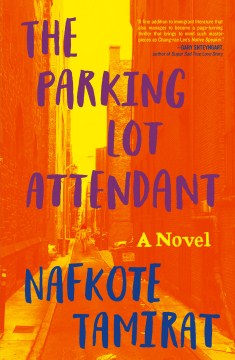 *Starred Review* The unnamed, 16-year-old narrator of Tamirat's mysterious and steadily exciting first novel begins her story on the island of B—before backtracking to explain how she and her father ended up there. The only child of her Ethiopian immigrant parents, she had been living with her father, a stoic and reliable repairman, in Boston. Two years earlier, she met fellow Ethiopian Ayale, a magnetic, much-older parking-lot attendant, and her "first encounter with the unofficial intelligence network that includes all Ethiopians in any given locale." She hasn't fully forgiven her father for the unexplained absence he took during her first few years, despite the quiet, if boring, stability of their life together ever since, while Ayale both holds up a mirror for her emerging brilliance and seems to promise an ever-deepening connection. When she's the last to understand that her work delivering wrapped parcels around Boston, treated nonchalantly yet paid for generously by Ayale, is not the simple service to the Ethiopian community that Ayale first described, it becomes clear that her safety is not guaranteed. Tamirat's razor-sharp prose fashions a magnificently dimensional and emotionally resonant narrator, herself a storyteller who frames her own tale with beguiling skill. This debut is remarkable in every way. Copyright 2018 Booklist Reviews.

On an island only referenced as B__, a young, unnamed narrator joins her father at a presumably utopian commune—just a few of the mystifying elements in a debut novel that will perplex and even exasperate some readers. The narrator does launch a tale about what led her to the island from her home in Boston, but the connections between her current predicament and her interactions with Ayale, the parking lot attendant and unofficial leader of Boston's Ethiopian community, are left largely unresolved. As her relationship with Ayale deepens, she suspects that many of his activities are illicit, though what these activities may be is not entirely clear despite perhaps too subtle hints of homicide, terrorism, and organized crime. What is clear here is that this coming-of-age story falters, except in Tamirat's strong development of the narrator's voice and the charismatic characterization of Ayale. While it's reasonable to assume that the gullibility of the adolescent narrator shapes the plot's haziness, by the novel's end Tamirat has simply not provided enough of a story upon which to hang her fairly well-developed characters.

Tamirat's wonderful debut novel weaves growing pains, immigrant troubles, and moments of biting humor. When the story opens, the unnamed 15-year-old narrator and her father are living on an island run by a shadowy collective. She then flashes back to her life in Boston with her father, an Ethiopian immigrant, and the story of how they ended up on the island. An overheard Amharic conversation draws her to much older Ayale, a fellow Ethiopian and parking lot attendant. Attracted to his challenging personality and intrigued by the sway he has over a wide range of devoted followers, the narrator becomes deeply attached to Ayale. Tension fills Tamirat's story: quotidian teenage frustrations are combined with the real danger of the narrator's unquestioning trust in Ayale's hasty explanations for his package delivery scheme. As questions pile up and strangers start lurking near the narrator's home, the danger rises and Ayale reveals his intentions. One of the debut's highlights is the narrator: she is both able to hold her own against Ayale in intellectual debates and desperate to gain his acceptance and love; like many teenagers, she is at once world-weary, naive, outspoken, and vulnerable. The unsettling conclusion serves as a perfect ending for this riveting coming-of-age story full of murky motives, deep emotion, and memorable characters.