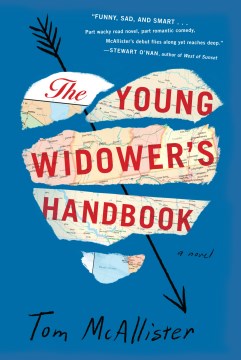 Hunter Cady has always been a bit . . . unfocused. He's 29, and his singular accomplishment so far has been to marry the lovely Kait, who is clever, confident, and full of direction. When Kait dies unexpectedly, Hunter is left completely unmoored. Then, after Kait's boorish family descends and demands her remains, Hunter doesn't know what else to do except run away. With the aid of the $750,000 life-insurance policy Kait was smart enough to take out, Hunter embarks, with Kait's ashes as his traveling companion, on a crazy cross-country trip, documenting their adventures on Facebook. Among other things, he almost loses her at a Renaissance faire; does lose her (but recovers her the next day) when he's unwittingly roped into a bachelorette party; and gives his father, Jack, the slip, after Jack tracks him down at a hotel in Oklahoma. McAllister's debut novel is at turns funny and touching, particularly in the vignettes sandwiched between the narrative, which delve into Hunter's thoughts and feelings about his marriage and his wife. Expect comparisons to Jonathan Tropper and Nick Hornby. Copyright 2017 Booklist Reviews.

Devastated by his beloved wife's sudden death, charming if underachieving Hunter Cady literally runs away with her ashes, encountering a host of quirky characters as he comes to understand the meaning of his marriage in his life.. Copyright 2016 Library Journal.

Acclaimed nonfiction writer and editor of Barrelhouse magazine McAllister's first novel features the socially awkward twentysomething Hunter, who lives with his parents and works a dead-end job at a car rental agency until he meets the beautiful, funny, organized Kaitlyn Cady, who helps him get his life in order. After only a few years of blissful matrimony, she drops dead. As if this wasn't bad enough, it was an ectopic pregnancy that killed her. Hunter deals with the extended family and funeral in the ways you would expect a sarcastic man-child to, and when they ask to scatter her ashes, he instead disappears with them. He drives around the country looking for a suitable final resting place for his young bride. On his journey he flashes back to scenes from their marriage. The narration alternates pointlessly among second and third person, and the characters are never given enough depth for you really to feel for them. The strange people Hunter runs into on his road trip provide brief humor in an otherwise overly sentimental novel. VERDICT While this work may be of interest to readers who like deep studies of marriages and grief, others may find it best suited for a Lifetime movie adaptation. [See Prepub Alert, 8/8/16.]—Kate Gray, Boston P.L., MA. Copyright 2016 Library Journal.

McAllister writes with heartfelt emotion about the sudden death of a spouse in this remarkable debut novel. Hunter Cady, an immature 29—his life filled with such attempts at self-improvement as "the Month of No Hot Dogs," and "the Month of Being Romantic"—spends an inordinate amount of time with his wife, Kait, planning for all the wonderful trips they will someday take. He has the shock of his life when she suddenly dies because of a ruptured fallopian tube from an ectopic pregnancy that they had no knowledge of. Nearly catatonic with grief, he finally takes his wife's' ashes with him on the road trip they never took. Along the way readers learn about Hunter's no-nonsense father and New Age mother. He has a comical and nearly tragic experience at a renaissance fair, and at one point he joins an older man in search of the wife who left him years ago. Hunter's poignant realizations about what his wife meant to him, intermingled with his humorous and spot-on views of the people and places he encounters, as well as how he uses social media to grieve, bring him to the fitting conclusion that even beyond the grave, Kait helps him become the man he always wanted to be for her.