The power : a novel / Naomi Alderman. 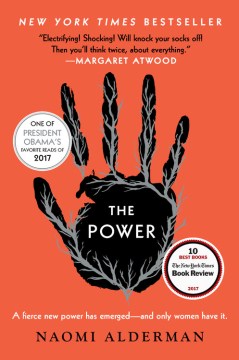 *Starred Review* Alderman's (The Liar's Gospel, 2013) sublime new novel posits a game-changing question: What if women suddenly manifested an electrical charge that they could control and use as a weapon? This new female "power," the origins of which are attributed to a WWII chemical experiment, first becomes evident in teenage girls around the world in the present time. Roxy, the daughter of an English mobster, attacks the men who have come to kill her mother, while in America, foster-child Allie finds she has the ability to fight off her lecherous foster father. Teenage girls can somehow awaken the power in older women, as Margot, an American politician, learns when her daughter injures a boy in a fight. And in Nigeria, Tunde's journalism career is launched when he observes a girl using her power on another boy. Alderman wrestles with some heady questions: What happens when the balance of power shifts? Would women be kinder, gentler rulers, or would they be just as ruthless as their male counterparts? That Alderman is able to explore these provocative themes in a novel that is both wildly entertaining and utterly absorbing makes for an instant classic, bound to elicit discussion and admiration in equal measure. Copyright 2017 Booklist Reviews.

Alderman's science fiction novel, set all over the world, was awarded the Baileys Women's Prize for Fiction. Sometime in the near future, young women discover they have within them the ability to unleash skeins of electrical current that can maim and kill. One of them, an abused American foster child, joins a group of nuns, reinventing herself as the healer Mother Eve. She promotes a new religion in which Jews look to Miriam, Muslims to Fatimah, Christians to Mary. Her ally is an English crime lord's daughter named Roxy, whose skein is warrior strong, and whose violent family has global connections. Meanwhile Tunde, an opportunistic photojournalist, manages to break the news of several women's revolts across the world. The first upheavals are in Saudi Arabia and Moldova, places where women have few rights. But the woman who rules Bessapara, the first nation of the new world order, is unscrupulous and afraid, and she creates further instability by stripping men in her country of all rights and implicitly threatening world war. Roxy runs into trouble trying to keep a lid on this international situation, while Mother Eve convinces herself it might be for the best to start the world anew. Margot, an American politician taught to tap into her skein by her daughter, rises to power in the States, her message becoming more hawkish as she gains influence. But she is corrupted by her addiction to power over her male rivals, and she, too, plays a part in the endgame. Alderman tests her female characters by giving them power, and they all abuse it. Readers should not expect easy answers in this dystopian novel, but Alderman succeeds in crafting a stirring and mind-bending vision. (Oct.)