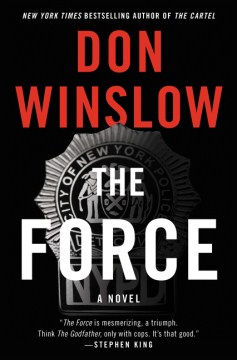 *Starred Review* It's rare for a writer to produce two career-defining masterpieces back-to-back, but that's exactly what Winslow has done by following The Cartel (2015) with The Force. In an era rife with racially motivated police brutality, Winslow has created what will likely become our quintessential cop novel, looking both at what cops do right and wrong with clear-eyed realism and passionate humanity. When this epic-scale narrative begins, Denny Malone, the detective who leads the NYPD's elite Manhattan North Special Task Force ("Da Force"), is sitting in a jail cell, stripped of gun and badge and accused of being a dirty cop. The tale then moves back and forward in time, showing how Malone and his team have leveled a full-frontal assault on drugs and guns in Manhattan North without regard to protocols, procedures, or, eventually, the law. Not only does Winslow detail how that cowboy approach has earned the grudging respect of some and the eternal enmity of others in Da Force's largely minority district but he also tracks the effect of "the Job" on Malone and his friends and the granular process through which something good becomes something very, very bad. Reminiscent of Joseph Wambaugh's The Choirboys (1975), Winslow's novel takes the theme of cops under pressure much further, exposing corruption at higher levels and suggesting that responsibility for "the fire this time" with which the book ends lies more in the penthouse than on the street. Grand in scope and equally grand in execution.HIGH-DEMAND BACKSTORY: Social media is already buzzing about the arrival of The Force, and Winslow's new publisher will take full advantage of that through book-festival season and beyond. Copyright 2017 Booklist Reviews.

In this latest from best-selling author Winslow, who scooped up Los Angeles Times Book Prize and New York Times Critics' Pick credentials for his recent , NYPD detective sergeant Denny Malone is committed to fighting the good fight—except now he's dirty, too. With a 250,000-copy first printing.

After more than a dozen acclaimed, under-the-radar novels, Winslow moved into the first rank of American thriller writers with his drug-war odyssey The Cartel. His latest offers a similarly epic take on the cop novel, though it lacks its predecessor's singular brilliance. Denny Malone, a veteran NYPD detective sergeant, stalks the streets of Upper Manhattan, knowing nothing happens or gets dealt without his knowledge or consent. The higher-ups have given his elite team, "Da Force," free rein to keep the peace, even if rules are bent and spoils pocketed along the way. In a city where someone's going to profit off the drugs and the violence, why shouldn't it be his team? Malone prides himself on loyalty and tradition, but after a multimillion-dollar heroin bust gets the attention of the feds, he's forced to make an unthinkable decision: to turn on his brother cops and rat on his beloved teammates. Winslow's writing, with its torrents of profane, single-sentence paragraphs, is as potent as ever, but his story's trajectory is familiar, particularly for fans of the show The Shield. Despite those reservations, this propulsive novel should be eagerly welcomed by readers of Ken Bruen. [See Prepub Alert, 12/12/16.]—Michael Pucci, South Orange P.L., NJ

Edgar-finalist Winslow () peers into the soul of modern America through the eyes of a supremely skilled and corrupt police officer, in this epic novel of devastating moral complexity. Dennis Malone, a veteran NYPD detective sergeant, leads the Manhattan North Special Task Force, an elite unit established to combat drugs, gangs, and guns. Keeping the citizens safe is often messy work and sometimes requires unorthodox methods to get results. Gradually, however, Malone and his crew have slipped over the edge, stealing millions in drugs and cash over the years, including a massive amount of heroin seized in the city's biggest-ever drug bust. Now the feds have built a case against Malone, and they threaten to take him down if he doesn't help bring in bigger players in the criminal food chain, even if it means betraying his partners. As the reader discovers, Malone's corruption is but a tiny part of a much larger system that extends into the highest reaches of New York's power structure, where the real business is done, and everyone on the chain takes a cut. Fans of modern masters such as Don DeLillo, Richard Price, and George Pelecanos will be richly rewarded.