The futures : a novel / Anna Pitoniak. 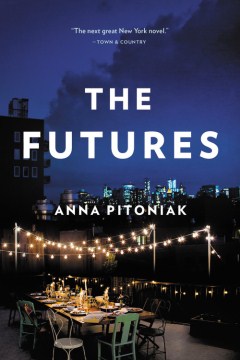 Recent college grads Julia and Evan, who alternate chapters narrating Pitoniak's debut, have just traded New Haven for New York. Without any distinct post-college plans, Julia thinks moving in with Evan is as good as anything else. Evan, on the other hand, has landed a coveted spot at a highly respected hedge fund, one of the few, he'll soon learn, that's safe in the about-to-happen 2008 market crash. Quickly, Evan is working around the clock, attracting the attention of a boss whose elusive praise is wildly sought-after by his competitive colleagues. Julia, working "only" normal hours, is lonely and disappointed, if not surprised, by how quickly playing house has become anything but fun. When Evan gets involved in a deal that he suspects, then knows, isn't above-board, and Julia seeks fun and comfort elsewhere, Pitoniak keeps the pace moving at a steady clip. Through Julia, preppy, privileged, depressive, and Evan, a Canadian country boy running from his roots, Pitoniak's well plotted, character-driven, interior-focused novel captures the knowable angst of the unknowable possibilities of modern young adulthood. Copyright 2016 Booklist Reviews.

Having met at Yale, small-town Canadian Evan and upper-crust Julia move together to New York. Julia is still trying to figure things out when Evan's involvement with a risky deal brings his hedge fund career crashing down. Lots of industry buzz; with a 35,000-copy first printing.

Julia, who comes from a wealthy family, has an art degree and no vision for her life beyond college. Evan is a Canadian hockey player from a working-class family. He, however, has a plan. His degree in finance lands him a job at a prestigious hedge fund in New York City. After meeting at Yale, Evan and Julia move to New York together, each struggling to establish a career. As they become immersed in their own interests, they grow apart. When the financial world crumbles, an ironic twist causes Evan to lose his job and destroys his faltering relationship with Julia. VERDICT This debut coming-of-age novel captures the insecurities of the first days of independent adulthood and the unintended consequences in the struggle for maturity. Readers of general fiction will enjoy this story. Recommended. [See Prepub Alert, 7/11/16.]—Joanna Burkhardt, Univ. of Rhode Island Libs., Providence. Copyright 2016 Library Journal.

Set amid the 2008 financial collapse, Pitoniak's assured debut explores the cost of realizing—and misinterpreting—one's dreams. Evan Peck, the son of grocery-store owners in remote British Columbia, needs student loans and a hockey scholarship to afford the Ivy League, while Julia Edwards hails from Northeastern privilege. Meeting at Yale, they fall promptly in love despite their different upbringings. Upon graduation, Evan lands a plum job at a Manhattan hedge fund fighting to survive the deepening Wall Street meltdown, as Julia, unsure of her calling, settles for a low-level job at small nonprofit. Soon, the couple seems to share little more than their cramped apartment. An exhausted Evan worries when the deal he's working on turns out to have a shady underside; Julia finds in a charismatic journalist the sense of promise that neither work nor Evan gives her. As the distance between them leads to betrayal, they must face the ways they have sabotaged each other and themselves. Navigating terrain—love and youth, college and city life—that's often oversimplified, Pitoniak eschews cliché for nuanced characterization and sharply observed detail. Evan and Julia ring true as 20-somethings, but Pitoniak's novel also speaks to anyone who has searched among possible futures for the way back to what Julia calls "the person I had been all along." (Jan.)