An American marriage : a novel / by Tayari Jones. 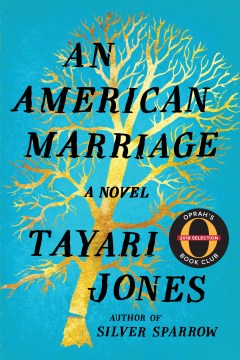 Married for just over a year, Roy and Celestial are still navigating their new dynamic as husband and wife. Then their lives are forever altered when they travel to Roy's small Louisiana hometown for a visit, and Roy is falsely accused of a harrowing crime and sentenced to 12 years in prison. The strain on their relationship is intense during Roy's incarceration, especially once Celestial's career takes off while he struggles with loss and feelings of abandonment. Nearly halfway through Roy's sentence, his conviction is vacated. In the aftermath of his unexpected release, the couple must confront difficult questions about the choices they've made as well as the expectations of others. For Celestial, it means reconciling the relationship with her husband with that of a longtime friend turned lover. Roy, on the other hand, faces the complexities of a life he no longer recognizes. Jones (Silver Sparrow, 2011) crafts an affecting tale that explores marriage, family, regret, and other feelings made all the more resonant by her well-drawn characters and their intricate conflicts of heart and mind. Copyright 2017 Booklist Reviews.

Novelist Jones (Silver Sparrow), recipient of the Hurston/Wright Legacy Award and United States Artist Fellowship, begins her story with Celestial and Roy, a young, newlywed couple excited about their future together, taking a trip to visit Celestial's family. Roy then makes a simple decision that changes his life. A woman in a nearby hotel room is raped and, having encountered Roy at the ice machine, later mistakenly identifies him as the culprit. Despite the lack of evidence, Roy is sentenced to prison for 12 years. Celestial knows that he is innocent and tries to support him despite her pain. She turns to best friend Andre, who was also a friend of Roy's, eventually beginning a relationship with him. When Roy's conviction is later overturned, his return is equally a joyous and a challenging occasion that brings up issues of love, family, and race. Jones's writing is engagingly layered with letters between the main characters integrated through the narrative. Her personal letter to readers demonstrates how writing this novel changed her. Layered like Pearl Cleage's What Looks Like Crazy on an Ordinary Day, this title will appeal to all readers of contemporary fiction. [See Prepub Alert, 8/14/17.]—Ashanti White, Fayetteville, NC

This BookExpo hit from the author of the multi-best-booked Silver Sparrow concerns newlyweds Celestial and Roy, whose marriage is strained when Roy is arrested and sentenced to 12 years in prison for a crime he didn't commit. A portrait of wrecked hearts and the consequences of a skewed justice system that often criminalizes young black men; with a 15-city tour.

Jones () lays bare the devastating effects of wrongful imprisonment in this piercing tale of an unspooling marriage. Roy, an ambitious corporate executive, and Celestial, a talented artist and the daughter of a self-made millionaire, struggle to maintain their fledgling union when Roy is sentenced to 12 years in prison on a rape charge he is adamant is false. Before Roy's arrest, the narrative toggles between his and Celestial's perspectives; it takes an epistolary form during his imprisonment that affectingly depicts their heartbreaking descent into anger, confusion, and loneliness. When Roy is proven innocent and released seven years early, another narrator is introduced: Andre, Celestial's lifelong best friend who has become very close to her while Roy has been away. Jones maintains a brisk pace that injects real suspense into the principal characters' choices around fidelity, which are all fraught with guilt and suspicion, admirably refraining from tipping her hand toward one character's perspective. The dialogue—especially the letters between Roy and Celestial—are sometimes too heavily weighted by exposition, and the language slides toward melodrama. But the central conflict is masterfully executed: Jones uses her love triangle to explore simmering class tensions and reverberating racial injustice in the contemporary South, while also delivering a satisfying romantic drama.