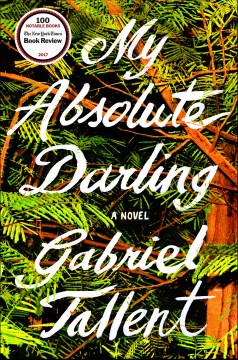 *Starred Review* "My absolute darling," Martin calls his 14-year-old daughter, Turtle. The girl's mother is dead, and the misanthropic and misogynistic father and self-hating daughter live, surrounded by guns, in a run-down house on the Northern California coast near Mendocino. A pariah at school, Turtle has only one friend and confidant, her alcoholic grandfather, until she meets funny, articulate Jacob, who is fascinated by her. Learning of her interest in the boy, Martin beats her savagely with an iron poker, saying "You're mine. Mine." Perhaps further expressing his ownership of his daughter, he routinely rapes her, leaving Turtle with deeply conflicted feelings, both loving and hating him simultaneously. This is Turtle's life until her grandfather's death becomes the catalyst for Martin's disappearance. In his absence, Turtle leads a relatively peaceful existence in Jacob's company until her father returns three months later, bringing with him a 10-year-old girl, and things begin to change dramatically. Turtle is an extraordinary character whose thoughts and actions enliven the pages of Tallent's remarkable first novel—remarkable not only for its characterization but also for its minute examination of the natural world that Turtle inhabits. So vivid is the gorgeously realized setting that it becomes itself a major character in a novel that lingers in the mind long after the final page. Copyright 2017 Booklist Reviews.

Fourteen-year-old Turtle wanders the northern California coast but always circles back to her troubled father, the center of her life since her mother's death. But then she meets Jacob, who lives comfortably in a big house and thinks she's awesome, and suddenly Turtle understands that life with her father cannot continue. How good is this late August title? Good enough to make the BEA Buzz panel.

meets Rambo in this emotionally fraught first novel. Fourteen-year old Julia "Turtle" Alveston is growing up in Northern California, near Mendocino, under the overprotective eye of her abusive father, Martin, who, for all intents and purposes treats her like they live in a two-person survivalist camp—he teaches her how to shoot and hunt in the wild, and abuses and sexually molests her. Even though she goes to school, Turtle feels cut off from her fellow middle-school students until the day she meets Jacob, a high school student whose sudden appearance in her life forces her to question for the first time the way she's being raised. Martin adds a new member to the family, which forces Turtle to make a bold move to keep his history of abuse from repeating itself, leading to a suspenseful and bloody climax at a teenage house party. In Turtle, Tallent has crafted a resourceful and resilient character. Unfortunately, Martin is such an obvious psycho creep that readers will wonder why the characters he interacts with—Turtle's teachers, a friend from the old days—don't see through him. Jacob, too, in the dialogue the author puts in his mouth, doesn't sound like a real teenager. In the end, though, Turtle's story is harrowingly visceral.