Today will be different : a novel / Maria Semple. 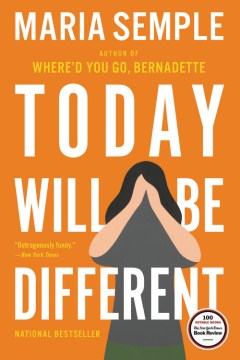 Semple returns to ground she covered in Where'd You Go, Bernadette? (2012), with an artistic antiheroine fumbling through her life of privilege as an NYC transplant to Seattle. Married to a celebrity hand doctor and 10 years separated from her career as a groundbreaking animator, Eleanor Flood spends her days studying poetry with an untenured professor and thinking acerbic thoughts about the other moms at her precocious son's private school. Having lunch with a former minion breaks something free in Eleanor's past, and her life falls apart over the course of an afternoon. Readers learn details of her backstory and will sympathize despite the seemingly trivial nature of her troubles (Sticking her foot in her mouth with her poetry teacher! Estrangement from her sister! Her husband's absence from his practice! Her son's enjoyment of makeup!). Hilarious and touching, this will satisfy Semple's numerous fans and gain her new ones. Give this to readers of women's fiction, Seattle denizens and aspiring residents, and people reviewing their lives and choices. Copyright 2014 Booklist Reviews.

Start the day bright and early. Organize son Timby for school. Get to those yoga and poetry classes. Ditch the bad language. Become passionate again with husband Joe. Eleanor has just hatched a small-step plan for polishing up her life, but it's blown to smithereens when Timby wangles a day off from school and Joe tells the office—but not Eleanor—that he's on vacation. Now she's in for some big changes. Semple's Where'd You Go, Bernadette, slated for the big screen, has sold over a million copies across formats and was a New York Times Best Book. With a 200,000-copy first printing.

Narrated by irreverent Eleanor Flood, a self-described "past her prime animator" who achieved fleeting fame, Semple's latest novel following the best-selling Where'd You Go, Bernadette features the author's trademark satire. After relocating from New York to Seattle, Eleanor's erratic life consists of shuttling son Timby, lunches with friends she can't stand, poetry lessons with tutor Alonzo, and thinking about revitalizing her marriage to Joe. That is, until an old friend mentions Eleanor's estranged sister, Ivy. Interweaving chapters provide flashbacks to Eleanor and Ivy's difficult childhood after the death of their mother and years with an emotionally distant, alcoholic father. Semple acutely captures the complexities of sibling relationships when describing Ivy's hurried marriage to overbearing scion Bucky Willett, the series of events that led to the sisters' estrangement, and their failed efforts to reconnect. Present-day chapters focus on Timby faking his way out of school and Joe's unexplained absences at work, causing Eleanor's paranoia and insecurities to get the best of her. VERDICT An introspective look, both comedic and tragic, at attempting to be the best one can be: wife, mother, or sibling. While not as laugh-out-loud funny as Where'd You Go, this book will satisfy fans of Semple and satire. [See Prepub Alert, 4/18/16.]—Stephanie Sendaula, Library Journal

On the fateful day she decides to be her "best self," Eleanor Flood—cult-famous cartoonist, mother, wife, cynic—spirals from one catastrophe to the next. Her day quickly turns hectic when her son, Timby, comes home sick from school. Hoping his father might help, Eleanor instead begins to suspect her surgeon husband is having an affair when his receptionist acts cagey. Eleanor's ego is bruised when she realizes an underling she fired years ago is now a famous artist, she dodges calls from her publisher about a long-passed deadline for her graphic memoir, and, finally, she suffers what may be a concussion after crashing headfirst into a sculpture. The latest from Semple (Where'd You Go, Bernadette?) is a sharp, funny read, and the author injects quirky elements—drawings, a comic book, photocopies of poems—to add another layer of enjoyment. Though Eleanor is snarky, her troubles and growing calamities are engaging. Some of her encounters are a bit too convenient, and the trope of a "day from hell" makes for shallow interactions between characters, but Semple augments these first-person antics with third-person sections that dig deep into Eleanor's past, finding particular resonance when telling the story of Ivy, the sister Eleanor feels she has lost to a wealthy husband in New Orleans. In the end, the novel wraps up too neatly, but the ride is consistently entertaining. Agent: Anna Stein, ICM Partners. (Oct.)