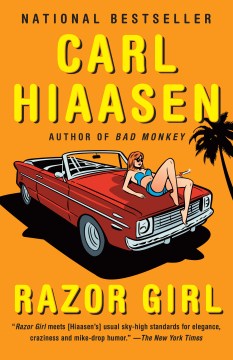 *Starred Review* Andrew Yancy (Bad Monkey, 2013) returns in this immensely entertaining wild ride through the Florida Keys. He is still doing penance as a health inspector on roach patrol for an earlier assault with a car vacuum. But when the star of a redneck reality show called Bayou Brethren goes missing, Yancy sees a chance to win back his real cop job at the sheriff's office. Merry Mansfield, the Razor Girl, is sharp, that's for sure, and one of the coolest characters Hiaasen has ever brought to the page. She runs car-crash scams but has the proverbial heart of gold, which lands her bejeweled flip-flops in a diabolically complicated story that includes (and often skewers) phony reality shows and the fine folks who bring them to us: goofball goodfellas; sand-restoration, reef-raiding scammers; an ill-fated, mongoose-owning stinky copycat psycho; a high-profile product-liability lawyer who's dangerously addicted to the very male-enhancement potion for which he recruits litigants in his TV commercials. And, oh yes, let's not forget an environmentally invasive infestation of Gambian pouched rats, electric cars, and cruise lines, along with Sharpie pens that create a male enhancement that perhaps only this author could dream up. Or maybe it is one of the true "lurid" Florida tales he claims to have incorporated into the story? This is the ultimate beach read for anyone with a taste for Hiaasen's skewed view of a Florida slouching toward Armageddon. Copyright 2014 Booklist Reviews.

Since this is Hiaasen, expect wild characters, starting with Razor Girl (aka Merry Mansfield), perpetrator of car-crash scams and linked to Andrew Yancy, who lost his detective badge after confronting his ex-lover's husband with a Dust Buster but seeks to get it back by solving a murder. With a 300,000-copy first printing and a nine-city tour.

At the start of Hiaasen's breezy, enjoyable sequel to 2013's Bad Monkey, Lane Coolman, a Hollywood talent agent, is driving from Miami to Key West to keep an eye on Buck Nance, star of Bayou Brethen, a reality TV show, when his rental car is rear-ended by an attractive crash-scam artist, Merry Mansfield. Coolman ends up kidnapped, while Buck incites a riot at a Key West bar. Meanwhile, a Bayou Brethren fan, desperate to impress his TV hero, goes too far when he attacks a tourist. Aided by Merry, Andrew Yancy, a lowly health inspector looking for a way to get his job back with the sheriff's department, seizes the chance to solve a murder case in which Buck, who goes AWOL from his show, is a suspect. Add a few Gambian pouched rats, a New Jersey mobster, a businessman selling stolen sand, and reprehensible neighbors to the fast-paced plot, and readers will be hoping that Yancy and the other quirky denizens of Hiassen's Florida will soon be back for another screwball adventure. Author tour. 300,000 first printing. Agent: Esther Newberg, ICM. (Sept.)