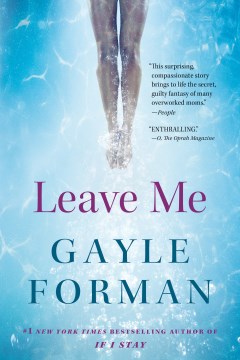 *Starred Review* Maribeth Klein is too busy with her four-year-old twins and her increasingly demanding job to realize she's had a heart attack at 44. Shrugging off the pain, she continues with her day, heading to the preschool to be the storytime reader. She tries to chip away at her increasing to-do list by persuading her husband take over dinner duties—parenting group is meeting at their Tribeca apartment that night. She manages to keep her ob-gyn appointment so she can mention that she's feeling a bit off. Next thing she knows, she's having open-heart surgery. Complications lead to an extended recovery period, yet somehow Maribeth is quickly back at everyone's beck and call. And her illness brings up long-buried questions—as an adoptee, she's clueless about her family medical history. When the demands get the best of her, Maribeth packs a bag, cashes out her bank account, and catches a train to Pittsburgh, where she hopes to find some answers about her past, as well as some time to herself. Popular teen author Forman's adult debut examines just what it means to be a working mother—beholden to everyone, seemingly obligated to forget who you really are. Maribeth's search for her birth mother and the way she settles into her new—albeit temporary—life away from home will strike a chord with readers, especially those who enjoy Jennifer Weiner and Meg Wolitzer. Copyright 2014 Booklist Reviews.

Forman, a best-selling YA author whose If I Stay won a NAIBA Book of the Year Award, goes adult with this story of working mother Maribeth Klein, so frantic she doesn't realize she's had a heart attack. Upset that her recuperation seems an imposition on others, she packs her bags and flees. A Day of Dialog panelist.

Forman is no stranger to complex and emotional stories, having written the best-selling YA novel If I Stay, which was turned into a movie of the same name in 2014, along with writing its sequel Where She Went and the "Just One Day" series. In her first adult book, Forman breathes life into the story of 44-year-old magazine editor Maribeth Klein, too overworked and overwhelmed to realize that her chest pains were, in fact, a heart attack. While contemplating her future, Maribeth comes to terms with her past, fleeing her husband, Jason, and children Liv and Oscar to uncover the secrets of her adoption in Pittsburgh. Forman shines in letting readers decide if Maribeth is a villain for abandoning her family or a victim of her circumstances, following her long recovery through mysterious appointments with Dr. Grant, swimming lessons with adoption researcher Janice, and excursions with neighbors Todd and Sunita. In learning that everyone, including members of her birth and adoptive families, has secrets, Maribeth realizes the power of family in friends. VERDICT While it may leave fans of Forman's previous books wanting more, this novel is sure to be in demand and will especially interest adoptees and their families. [See Prepub Alert, 3/28/16.]—Stephanie Sendaula, Library Journal

YA author Forman's successful foray into adult fiction features a New York City magazine editor, Maribeth Klein, an über-organized mom who is juggling her stressful job, a self-involved husband, and a set of preschool twins that are a handful. She's so busy helping everyone else she ignores her heart attack symptoms, ending up with emergency bypass surgery. Following this massive disruption in her life, Maribeth decides the only way to recover from the emotional and physical trauma of what she's been through is to suddenly leave her family, fleeing to Pittsburgh, not only to escape but also, spurred by her health problems, to find out more about her own background as an adoptee. The author nimbly explores what drove Maribeth from her family as well as what compels her to look for her birth mother at the age of 44. She goes off the grid—using cash from her savings, a burner phone, old-fashioned yellow pages, and the local library—to get her bearings and put a semblance of a life together. With humor and pathos, Forman depicts Maribeth's complicated situation and her thoroughly satisfying arc, leaving readers feeling as though they've really accompanied Maribeth on her journey. (Sept.)

The misfortune of Marion PalmCulliton, Emily

How to walk awayCenter, Katherine

I almost forgot about youMcMillan, Terry