A word for love / Emily Robbins. 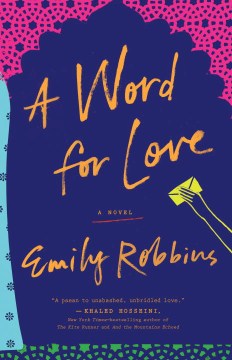 *Starred Review* Bea has seen firsthand that real life can mirror fiction. An American student of Arabic in an unnamed Middle Eastern country that is on the verge of revolution, Bea is on a mission to get her hands on the world-famous "astonishing text," a legendary story of star-crossed lovers Qais and Leila and the good Samaritan who kept their ill-fated adventures alive. In her host family's small home, however, Bea is witness to two life-changing events that unfold along parallel tracks: an enduring, illicit romance between Nisrine, the Indonesian housemaid, and Adel, a young policeman stationed next door; and the host family's patriarch's increasing involvement in political dissent, actions that might carry serious consequences. The themes here seem ripe for melodrama, but Robbins' promising debut steers clear of cloying sentimentality even if at times the similarities between Bea and the good Samaritan of lore feel forced. Still, Bea is a winning choice as a narrator, lending the story vulnerability and authenticity, especially because she is such an empathetic, and often helpless, spectator. With an impressive economy of words, Robbins, formerly a Fulbright Fellow in Syria, tells a story that proves that themes of love, loss, and freedom truly can transcend borders and time. Copyright 2016 Booklist Reviews.

Bea is an American student studying Arabic in an unnamed Middle Eastern country (presumably Syria). As she faces roadblocks in gaining university admission and access to an "astonishing text" at the national library, she becomes immersed in the life of the family with whom she boards. The father, Baba, is secretly involved in antigovernment activities, and the family's Indonesian maid, Nisrine, has a courtly love affair with policeman Adel. As Bea recounts Adel and Nisrine's story, it parallels the legend of Qais and Leila, which originates with the "astonishing text." By design, Bea's role in the story is more that of an observer than a protagonist, and through much of the novel she remains something of a blank. The lack of specificity about the country and time frame of the setting (although we know it's contemporary because the characters have cell phones) seems like a bit of a shortcut on the author's part, though it helps keep the focus on the personal story. In the end, this debut serves as a meditation on the many meanings and forms of love, and how words and texts can be used both to love and to harm. [See Prepub Alert, 7/25/16.]

While hoping to discover an ancient Arabic love story, an American exchange student in the Middle East bears witness to an ill-starred contemporary romance between a housemaid and a policeman of different cultural and political backgrounds. A much-touted debut and Day of Dialog Editors' Picks title.. Copyright 2016 Library Journal.

In Robbins's debut novel, unrest grows in Syria as an American student there becomes involved in a forbidden love triangle. Bea is as enamored of the Arabic language as she is with the idea of falling in love. Once in Syria, she is desperate to read a near-mythic ancient love poem referred to as "The Astonishing Text," in the hopes of having a rapturous experience reading it in its mother tongue. The content of that text—a besotted poet longs for his estranged beloved, while a shepherd befriends him and acts as keeper of his poems—runs parallel to Bea's experiences, in which she falls for a policeman who in turn falls for the maid of her host family, and she becomes the carrier of his love letters to the maid. While the love story intensifies, so too does the situation in Syria, affecting the patriarch of Bea's host home, who is viewed as a dissident by the government. Robbins weaves a story complete with exquisite sentences, including descriptions of the Syrian landscape: "the winds swept up the desert in the evenings... there were dark smudges of smoke like birds on the horizon." Bea's fascination with language and the unique characteristics of Arabic add delightful layers to the text. This is a rich, understated novel that offers an absorbing story full of longing, political intrigue, and the beauty found outside the familiar. (Jan.) Copyright 2016 Publishers Weekly.