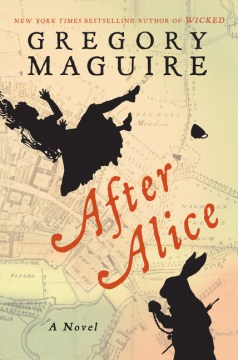 *Starred Review* When Alice first visited Wonderland over a century ago, Lewis Carroll introduced young readers to a world of imaginative characters and places such as had never been seen before. Now Maguire takes us on the journey again, this time in the company of Ada, who has fallen down the legendary rabbit hole after her friend. While Ada goes in search of Alice, always a few steps behind in the same vibrantly colorful land, Alice's sister, Lydia, remains in the ordinary world of Victorian England, searching the streets of Oxford for the missing girls, while her father visits with Charles Darwin to discuss the future of faith. Ada's adventure underground gives readers a new perspective on the oddities to be found there, but it's the search through Oxford that really turns this story on its head. Through Lydia and other new characters, Maguire firmly sets Wonderland in time and place and weaves an intricate web of symbolism and allegory, asking readers to consider issues of humanity that are as timeless as the original tale itself. The novel is full of the magic, wonder, and fresh twists that his fans have come to expect, and Maguire- and Wonderland-lovers alike will enjoy this fantastic return. Copyright 2014 Booklist Reviews.

What happened above after Alice fell down the rabbit hole into Wonderland? That is the question Maguire (Wicked) answers in his latest novel. In alternating chapters we follow Alice's sister Lydia, who was watching Alice but lost her, and Ada Boyce, Alice's neighbor and friend, who also falls into Wonderland. Lydia is beset—by Miss Armstrong, Ada's governess; by her father's entertaining Charles Darwin that day; with being a newly motherless 15-year-old girl. Ada, free of adult scrutiny and her scoliosis brace for the first time, experiences the oddness of Wonderland as she follows in Alice's wake. In one vexing day, Ada, Lydia, and Miss Armstrong must adapt to deal with their circumstances and find new facets of themselves. VERDICT Maguire fans should be pleased with his take, at turns clever and philosophical, on the Lewis Carroll classic. Other readers may find the slow build up of action and wrenching jumps between the two disconnected settings, one in stilting 19th-century language and the other in the nonsense of Wonderland, a bit too high a barrier to keep them reading. [See Prepub Alert, 4/6/15; see also Barbara Hoffert's "Why Alice Still Matters: Celebrating 150 Years of Wonderland with Gregory Maguire," LJ 8/15.—Ed.]—Nancy H. Fontaine, Norwich P.L., VT

Known for his revisionist take on children's classics, particularly his Wicked-ly good series drawing on The Wizard of Oz, Maguire turns his attention to Lewis Carroll's immortal Alice's Adventures in Wonderland—which celebrates its 150th anniversary this year. Here, Alice's friend Ada (briefly mentioned in the original) slides down the rabbit hole directly after Alice. Will Ada find Alice? What does the underworld have to say about our understanding of our world? Read and discover.

Maguire (Wicked) turns his attention to Lewis Carroll's Victorian fantasies, Alice's Adventures in Wonderland and Through the Looking Glass, in this thoughtful and disconcertingly memorable novel. Ada Boyce, Alice's best friend, also falls down a rabbit hole into a phantasmagorical realm where she too is tossed and bossed about by strange creatures who delight in clever, frustrating wordplay. She longs to shed the metal brace that both imprisons and protects her crooked back, but she also wants to reunite with Alice and go home. Meanwhile, Alice's older sister, Lydia, disturbed by the death of their mother and her own impending womanhood, searches distractedly for a visiting little boy, Siam, who has climbed into the world on the other side of the mirror in the family drawing room. Maguire frequently pulls back from the action to offer a larger perspective as characters struggle to discover who and what they are—and, most importantly, why they are. This is a feast for the mind, and readers will ruminate on it long after turning the last page. (Oct.)