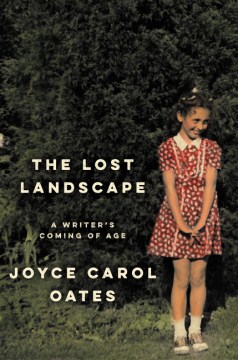 *Starred Review* In her new memoir following in the wake of the best-selling A Widow's Story (2011), Oates reflects with piquant wit, startling frankness, and mesmerizing specificity on the aspects of her life that made her a writer. Such as the fact that her favorite playmate when she was a little girl on a small, faltering farm in western New York State was Happy Chicken, who mysteriously disappeared on the very day her beloved "town" grandmother brought her to the public library for her first library card. Deep down Oates knew her pet hen's cruel fate. It's just that she tried not to dwell on the grim realities of her world, which included the traumatic secrets of her poor, struggling Hungarian and Irish immigrant relatives and the "meanness and brutality" of the older boys in her one-room schoolhouse. Oates found refuge in books, and, as a chronic insomniac, she prowled, alone and at risk in the night, the land that so deeply influences her work. Amid redolent descriptions of Sunday drives, laundry on the line, playing the piano, and tricky friendships, Oates pays tribute to her parents and tells the wrenching story of her sister, born, on the writer's eighteenth birthday, afflicted with such severe autism that she has no language. Generous in her personal disclosures in this graceful and bracing chronicle, Oates also considers the writer's calling and the necessity and resonance of sympathy. HIGH-DEMAND BACKSTORY: Given the popularity of Oates' previous memoir, this spellbinding coming-of-age narrative, backed by an author tour and an extensive media campaign, will be a veritable readers' magnet. Copyright 2014 Booklist Reviews.

The author of multiple books and winner of multiple awards, including several lifetime achievement awards, Oates returns to the memoir for the first time since 2011's A Widow's Story to chronicle a tough and toughening childhood in rural western New York State. She recalls friends and family, a favorite red hen, and her passion for storytelling and Alice's Adventures in Wonderland, showing us the roots of her writing while clarifying the lessons in hard work, loss, and sacrifice taught by the farming life.

Oates (Roger S. Berlind '52 Professor of the Humanities, Princeton Univ.), a prolific writer by any standard, recounts here how and why she became a writer. Growing up in rural western New York, she lived on her family's farm, bonded with a hen, fell in love with Alice in Wonderland, and came to understand some harsh realities at an early age. Much like Eudora Welty's One Writer's Beginnings and Mary Ward Brown's Fanning the Spark, Oates writes about her formative years with clear vision. Her use of vignette gives the book the dreamt quality that some readers will associate with her fiction. VERDICT Readers of Oates's best-selling memoir, A Widow's Story, will appreciate this new account, as will fans of her earlier fiction. [See Prepub Alert, 3/16/15.]—Pam Kingsbury, Univ. of North Alabama, Florence

"I scarcely remember myself as a child. Only as an eye, an ear, a ceaselessly inquisitive center of consciousness," Oates (A Widow's Story) admits, and so this memoir of her early life strings together the recollections that most deeply impressed her consciousness. They reveal an intensely shy, nervous, self-admittedly secretive child, as easily moved to terror as to wonder at the formative mysteries of childhood: the loss of a beloved pet chicken and later a grandfather, the sense of living in a landscape and a family haunted by violence, the acquisition of a library card and the discovery that "adult writing was a form of wisdom and power." The essays, many previously published elsewhere, range stylistically, but when Oates falls into her narrative strengths—an alert eye for detail, an atmosphere suffused with dread and apprehension, an enormous sympathy for her characters—the pieces become stunning, as in accounts of a childhood friend lost to suicide ("The Lost Friend"), time spent in graduate school in Madison, Wisc. ("Nighthawk"), and Oates's autistic younger sister ("The Lost Sister"). A fascination with the quirks of fate that concatenate into a life, and a long, deeply felt love for her parents, thematically unite this varied, kaleidoscopic, and ultimately insightful map to the formation of a writer who understands "how deeply mysterious the ‘familiar' really is." Photos. (Sept.)

Between them: remembering my parentsFord, Richard, 1944-

Things I've been silent about: a memoir in momentsNafisi, Azar

Under magnolia: a Southern memoirMayes, Frances