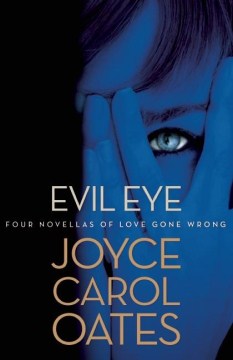 Oates adds to her treasury of diabolical tales (The Corn Maiden and Other Nightmares, 2011; Black Dahlia & White Rose, 2012) a quartet of shrewd and unnerving novellas about toxic entanglements. In the stylishly gothic title story, the legendary director of a performing arts institute swoops in and makes a much younger researcher shattered by the deaths of her parents his fourth wife, installing her in his fastidiously appointed showcase house, where her inchoate fears about his soul-freezing temper crystallize upon meeting his disfigured first wife. Oates has a superbly disconcerting gift for orchestrating slowly coalescing realizations that something is horribly wrong, as in 16-year-old Lizbeth's reluctant recognition that her polite, Polaroid-snapping boyfriend may, in fact, be dangerous. In other subtly sinister, adeptly paced scenarios, a failing frat boy high on Ritalin and video-game fantasies turns murderous, and a frigid young woman identifies her childhood abuser. Oates' deft tales of vulnerable women with surprisingly deep reservoirs of strength and a capacity for revenge are infused with wry and knowing commentary on the battle between the sexes, the justice system, and the consequences of entitlement. HIGH-DEMAND BACKSTORY: Readers are always ready for new dark tales by best-selling Oates, and this potent volume will gain added visibility given all the attention surrounding her latest novel, The Accursed. Copyright 2013 Booklist Reviews.

In the most recent offering by the preeminent Oates (The Falls) are exquisite portrayals of young, vulnerable people who are preyed upon by one another, who sometimes succumb to the burden of memory and present-day events, and who sometimes achieve victory in working through "love gone wrong." The collection's opening novella, "Evil Eye," depicts Mariana, the fourth wife of a very demanding, wealthy man. When the first wife comes to visit, Mariana hears whispers of what happened to the woman's infant son from that first marriage. Mariana is unable to cope with this news, and her world is completely shattered. In "So Near, Anytime, Always," Lizbeth, an awkward, lonely girl, is initially flattered by handsome Desmond's attentions. When he turns to stalking and otherwise threatening her and when she finds out what happened to his younger sibling, Lizbeth tries to break off the relationship—with dire consequences for Desmond. "The Execution" is a nerve-racking page-turner characterizing young college student Bart, who has been continually bullied by his wealthy father. "The Flatbed," the last tale, deals with childhood sexual abuse and healing still raw memories. VERDICT These powerful, suspenseful novellas can easily keep readers awake at night and perhaps should be read in bright daylight. Highly recommended.—Lisa Rohrbaugh, Leetonia Community P.L., OH

These four exquisitely suspenseful novellas from Oates (The Accursed) offer sharp characterizations, whether it be the naïve and romantic 16-year-old Lizbeth Marsh; the deeply spoiled, deeply disturbed Bart Hansen; or Mariana Mohr, the fourth wife of an accomplished intellectual. The last named is in the title story, which is by far the volume's strongest. The eye in question is both a beautiful glass nazar—a valuable talisman that's in Austin Mohr's art collection—and the missing eye of his diminutive, mesmerizing first wife who comes to visit. In "The Execution," Bart Hansen's plan to murder his parents is as inadequate as his father believed all his plans were. "So Near Anytime Always" has a surprise ending to the relationship of Lizbeth Marsh and the unfathomable Desmond Parrish. The relationships between the damaged, sometimes monstrous individuals who people these pages will keep the reader riveted. Agent: Warren Frazier, John Hawkins & Associates. (Sept.)

The wife between usHendricks, Greer

Behind closed doorsParis, B. A.

Everything ravaged, everything burnedTower, Wells, 1973-