Jack of spades : a tale of suspense / Joyce Carol Oates. 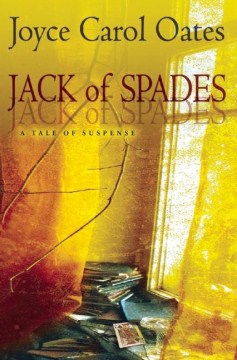 Andrew J. Rush is a successful crime fiction writer and long-married father of three grown children who lives with discipline and dignity on a lovely New Jersey estate in a beautifully appointed old mansion that includes a secret cellar library. Naturally, given that this is a deft and wily psychological thriller by the fathomlessly imaginative Oates (Daddy Love, 2013), Rush has something to hide. In addition to carefully and reliably crafting his bestselling, mannerly mysteries, he has also been furiously scribbling, in clandestine, late-night, alcohol-stoked marathons, poisonously angry, wretchedly twisted, and violent noir published under the pseudonym, Jack of Spades. Andrew is already struggling to maintain this assiduously compartmentalized life when he is summoned to court to face an inexplicable charge of plagiarism. Surely his accuser, a wealthy recluse who has also sued Stephen King, is a nut case, so why is Andrew freaking out? In this lashed-to-your-seat tale of mental disintegration, Oates conducts a chilling anatomy of a literary genius run dangerously amok and a cruelly parasitic marriage while also paying witty homage to literary horror. Delectably sharp, shivery fun. Copyright 2014 Booklist Reviews.

A model family man and good citizen of his upscale New Jersey town, Andrew J. Rush has sold millions of copies worldwide of his 28 tastefully elegant mysteries. You'd think he wouldn't be caught dead reading the dark and lurid series penned by the pseudonymous Jack of Spades. But in fact he is the Jack of Spades, and when he's accused of plagiarism, upright Andrew starts thinking more like nasty Jack.

Oates (We Were The Mulvaneys; Blonde) has written a great psychological noir novel, which also serves as a homage to Stephen King (once shunned but now embraced by the literary establishment). Andrew J. Rush, a seemingly mild-mannered and irritatingly self-absorbed and smug author of mainstream thriller fiction, has begun to write (in a partially fugue state) disturbing and violent novels under the Jack of Spades pseudonym. But when Andrew is accused of plagiarism and his daughter begins to ask questions about Jack of Spades, his carefully compartmentalized life begins to unravel. VERDICT As this tour de force reveals, Oates is a master of bleak literary fiction and its (sometimes) poor relation, crime/noir fiction. Examining and delineating insanity, obsession, paranoia, alcoholism, manipulation, and murder, not to mention book collecting and writer's block, this tale of suspense makes for another high-caliber Oatesian outing, displaying flair, noir sophistication, and King-like flourishes. [See Prepub Alert, 11/24/14.]—Seamus Scanlon, Ctr. for WorkerEducation, CUNY

A writer's secret pseudonymous identity becomes a conduit for his murderous dark side in Oates's sleek and suspenseful excursion into the literary macabre. For years refined crime novelist Andrew J. Rush—known to his audience as "the gentleman's Stephen King"—has moonlighted as Jack of Spades, an author of violent pulp potboilers. When an unhinged reader brings a ludicrous lawsuit against him for literary theft, Andrew snaps. Motivated by what Poe called "the imp of the perverse"—a quotation from the Poe story of that name serves as the book's epigraph—he begins acting increasingly like a character in one of his alter ego's nasty novels. Oates (High Crime Area) has endowed her first-person narrator with the slightly affected speaking style and overconfidence of one of Poe's monomaniacal protagonists. Although she nods to a number of Poe's classic tales—especially "The Black Cat" and "William Wilson"—the story's modern spin is entirely of her own clever invention. Readers are sure to be gripped and unsettled by her depiction of a seemingly mild-mannered character whose psychopathology simmers frighteningly close to the surface. Agent: Warren Frazier, John Hawkins & Associates. (May)

The word is murderHorowitz, Anthony, 1955-

The turn of the keyWare, Ruth

The woman in the windowFinn, A. J.