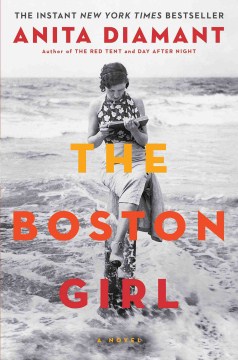 Much like Brian Morton's recent Florence Gordon, Diamant's new novel is a resonant portrait of a complex woman. When 85-year-old Addie Baum is asked by her granddaughter how she came to be the woman she is today, Addie launches into the story of her life. In a voice that is as comforting as it is fluid, and without a shred of self-pity, Addie tells of her poverty-stricken childhood as the daughter of immigrants living in Boston's North End neighborhood. Against her mother's wishes, she spends the summer of her sixteenth year at an inn for "young ladies" in a seaside town north of Boston. It's there she meets like-minded girls who will become lifelong friends and sees that there might be a way out for an intelligent young woman with ambition. She also talks about her sister's tragic circumstances; her first disastrous love affair; and her happy marriage. In addition to providing a graphic, page-turning portrait of immigrant life in the early twentieth century, Diamant's novel is an inspirational read that is likely to be a popular book-club choice.HIGH-DEMAND BACKSTORY: A media blitz, including an author tour, will back the latest from the best-selling author of the much-loved novel The Red Tent (1997) as well as Day after Night (2009) Copyright 2014 Booklist Reviews.

Eighty-five-year-old Addie Baum reminisces about her life in Diamant's (The Red Tent; Day After Night) step back in time. Addie's been asked by her 22-year-old granddaughter, Ava, to explain how she became the woman she is. Born to Jewish immigrant parents in 1900 in Boston's heavily populated North End, Addie and her two older sisters lived in a tenement with their unhappy parents who did not acclimate to this new world. But Addie's caring and loyal sisters are there for her. In 1915 she is a young teen, interested in her activities at a library group held at a neighborhood settlement house. Recalling situations with her compassionate eye and remarkable sense of humor, Addie observes upheavals large and small: changing women's roles, movies, celebrity culture, short skirts, and the horrible flu pandemic of 1918. She explores feminism, family, and love as well. VERDICT Diamant offers impeccable descriptions of Boston life during these early years of the 20th century and creates a loving, caring lead character who grows in front of our eyes from a naïve young girl to a warm, wise elder. Readers interested in historical fiction will certainly enjoy this look at the era, with all its complications and wonders. [See Prepub Alert, 9/8/14.]—Andrea Tarr, Corona P.L., CA

Bestseller Diamant (The Red Tent) tells a gripping story of a young Jewish woman growing up in early-20th-century Boston. Addie Baum, an octogenarian grandmother in 1985, relates long-ago history to a beloved granddaughter, answering the question: "How did I get to be the woman I am today?" The answer: by living a fascinating life. First reminiscing about 1915 and the reading club she became a part of as a teenager, Addie, in a conversational tone, recounts the lifelong friendships that began at club meetings and days by the seaside at nearby Rockport. She tells movingly of the fatal effects of the flu, a relative's suicide, the touchy subject of abortion and its aftermath, and even her own disastrous first date, which nearly ended in rape. Ahead of her time, Addie also becomes a career woman, working as a newspaper typist who stands up for her beliefs at all costs. This is a stunning look into the past with a plucky heroine readers will cheer for. (Dec.)