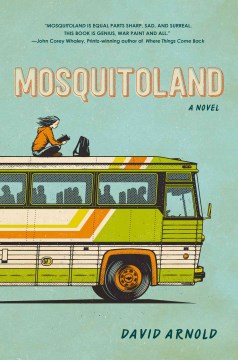 *Starred Review* As she so often claims, "I am Mary Iris Malone and I am not okay." For most of her 16 years, Mim has believed this to be the truth. But after her father and new stepmom conspire to keep her away from her mother, who is struggling to get well in Cleveland, Mim sets out on an odyssey from Mississippi. Arnold populates his debut novel with memorable, inventive characters who keep Mim company and keep the reader invested as the miles count down, such as her unlikely kinship with street kid Walt and the devastatingly handsome Beckett Van Buren. Meanwhile, the twists of Mim's story involving her immediate family are fleshed out through letters she writes in her journal. Arnold boldly tackles mental illness and despair, and sexual assault and sexual identity, without ever once losing the bigheartedness of the story. Arnold gives Mim a worldview that is open and quirky-morphing-into-kitschy, and though some events come off as overly convenient, the honesty always resonates. As Mim reaches Cleveland, and Walt and Beck follow the road to their own destinations, Arnold never lets up on the accelerator of life's hard lessons. In the words of one of Mim's Greyhound seatmates, this has pizzazz—lots and lots of it. Copyright 2014 Booklist Reviews.

Sixteen-year-old Mim hops a Greyhound to reunite with her sick mom in Cleveland. Flashbacks and letters interspersed into Mim's first-person account of her wacky road trip gradually reveal the truth about her mother's illness, Dad and brand-new stepmom Kathy's disturbing "BREAKING NEWS," and Mim's doubts about her own mental health. Mim's voice is a bit over-the-top quirky at times, but singular and full of heart.

Things are bad enough for sixteen-year-old Mary Iris Malone ("Mim"): her parents have abruptly divorced, and her father and brand-new stepmother, Kathy, have relocated Mim from Ohio to Mississippi. Then Mim's deduction (from stolen letters and overheard conversations) that her mother is ill, added to Dad and Kathy's (unspecified) "BREAKING NEWS," pushes her over the edge, and Mim hops a Greyhound to reunite with her mom in Cleveland. Along her 947-mile journey (counted down in chapter headings), Mim survives a bus crash; has several run-ins with pervy Poncho Man; joins forces with mentally disabled teen Walt and charming college dropout Beck; attends a Cubs game; and much, much more. First-person, episodic chapters relate Mim's wacky road trip. Interspersed flashbacks and letters (addressed to "Isabel") provide context to her current situation, gradually revealing the truth about her mother's illness, the "BREAKING NEWS," the identity of Isabel, and Mim's doubts about her own mental health. Mim's meditations on family -- as she considers the complex, sometimes harsh realities of biological family as well as the possibilities of choosing a family for herself -- sanity, and human nature are a bit over-the-top quirky at times. But her voice is so singular and full of heart that readers will gladly forgive the occasional excesses. katie birche Copyright 2014 Horn Book Magazine.

Newcomer Arnold's protagonist, 16-year-old Mim Malone, is as hold-nothing-back honest as they come, which makes the narrative she provides about her outlandish trek from Mississippi to Cleveland wholly enjoyable. Mim, blind in one eye from a solar eclipse and suffering from a "misplaced epiglottis" that results in unpredictable spells of vomiting, is reeling from her parents' divorce and an unclear psychiatric diagnosis when she is dragged to Mississippi by her father and new stepmother. Determined to get back to her mother, Mim hops a bus to Cleveland, beginning an Odysseus-like adventure that introduces a delightfully eclectic cast of characters, who are made all the more memorable by Mim's descriptions ("I've only known two other Carls in my lifetime—an insurgent moonshiner and a record store owner—both of whom taught me important... life lessons. In my book, Carls are a top-notch species"). There is no shortage of humor in Mim's musings, interspersed with tender scenes and a few heart-pounding surprises. Mim's triumphant evolution is well worth the journey. Ages 12–up. Agent: Daniel Lazar, Writers House. (Mar.)

A lite too brightMiller, Samuel

All the bright placesNiven, Jennifer

What happened to goodbyeDessen, Sarah