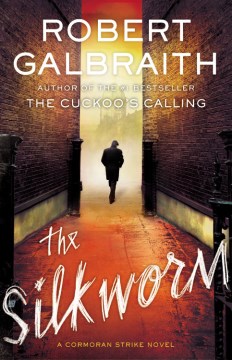 As we all know, Galbraith's first Cormoran Strike novel won great reviews but not great sales until it was revealed that Galbraith was actually J.K. Rowling. Wouldn't you know a famous novelist is at the heart of this second Strike outing. When Owen Quine disappears, his wife assumes that he's on one of his little escapades and asks Strike to find him and bring him home. But as Strike discovers, Quine has just finished a novel full of nasty portraits of people he knows, and one of them may have wanted to finish him off. Just announced but out in June.

J.K. Rowling, under her Galbraith pseudonym, again demonstrates her adroitness at crafting a classic fair-play whodunit in a contemporary setting, peopled with fully realized primary and secondary characters. PI Cormoran Strike, who debuted in 2013's The Cuckoo's Calling, has had a professional renaissance after his success in that book. To spite an uppity client, he accepts Leonora Quine's request to trace her missing husband, novelist Owen Quine. Leonora is pretty sure that Owen is at a writer's retreat, but has hit a dead end trying to get its address. Meanwhile, someone is following Leonora, and excrement is being shoved through her mail slot. Strike begins his search in London's literary circles, aided by his resourceful assistant, Robin Ellacott. He eventually finds a horrifically mutilated Owen, who was killed in a manner apparently copied from a controversial unpublished manuscript. The evolving relationship between Strike and Robin, whose fiancé objects to her choice of work, is realistically portrayed, and Golden Age fans will be delighted by passages that could have been written by John Dickson Carr (e.g., "Turning up his coat collar Strike thought he knew, now, what the meaning was: of a dwarf in a bloody bag, of the horns under the Cutter's cap and, cruelest of all, the attempted drowning"). Agent: Neil Blair, the Blair Partnership (U.K.). (June)