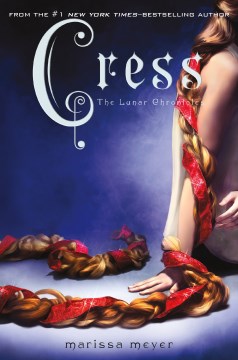 As the Lunar Chronicles continue, we meet Cress, with Rapunzel-like hair, who is trapped in an orbiting satellite. For seven long years, she has provided intelligence and security for the Lunar Queen, Lavana. Her latest assignment is to search for Cinder, the escaped cyborg mechanic who crashed Emperor Kai's ball and won his heart in spite of his announced betrothal to Lavana. Emperor Kai hopes his ultimate sacrifice—the marriage—will ensure peace between Earth and Luna. In this third book in Meyer's fractured fairy tale series, Cinder, Scarlet, Wolf, and Cress team up to stop the emperor's wedding, preventing Lavana from becoming Earth's queen and thus destroying it. Once again, Meyer offers up a science fiction fantasy page-turner that salutes women's intelligence and empowerment, with a subtle warning of the perils of misusing that power. Old and new romances, unfinished story lines, and the prognostication of wartime horrors all pave the way for Meyer's much anticipated next installment, Winter, expected in 2015. HIGH-DEMAND BACKSTORY: The previous titles in the Lunar Chronicles series were both New York Times best-sellers; with a major marketing campaign pushing Cress, expect similar results here. Copyright 2014 Booklist Reviews.

Meyer's fairy tale/sci-fi hybrid series (Cinder; Scarlet) continues with a "Rapunzel"-inspired story. Cress was taken from her Lunar parents as a baby and forced to live alone on a satellite. But her real loyalty lies with cyborg Cinder, who plans to protect Earth by dethroning Levana. Balanced nicely with Cress's story is Cinder's continuing journey. This multilayered, action-packed page-turner is sure to please series fans.

Meyer's fairy tale/sci-fi hybrid series (Cinder, rev. 1/12; Scarlet, rev. 3/13) continues with a "Rapunzel"-inspired story. Cress, taken from her Lunar parents as a baby, is forced to live alone on a satellite, spying on the Earthens for Queen Levana. But her real loyalty lies with cyborg Cinder's plan to protect Earth by dethroning Levana. After a rescue attempt of Cress goes awry, Cinder and an injured Wolf head to Africa in search of Dr. Erland; Scarlet becomes Levana's prisoner on Luna; and Cress and a temporarily blinded Thorne survive a crash landing on Earth and subsequent desert trek. Eventually everyone but Scarlet reunites, and they return to New Beijing to stop Emperor Kai's wedding to Levana. This multilayered, action-packed page-turner is sure to please series fans. Cress is a sympathetic protagonist, socially awkward due to her isolated youth but highly skilled in technology, and her teenage crush on Thorne evolves into a believable romance. And balanced nicely with Cress's story is Cinder's continuing journey -- she accepts her new identity as Princess Selene, the long-lost Lunar heir, but must find the inner strength she'll need in order to lead a revolution in the upcoming final installment, Winter. cynthia k. ritte Copyright 2014 Horn Book Magazine.

In Cinder (Feiwel & Friends. 2012), a cyborg Cinderella attempts to save her prince from an evil Lunar queen and ends up a fugitive for her trouble. In Scarlet (Feiwel & Friends, 2013), a feisty redhead enlists the help of a streetfighter named Wolf when her beloved grand-mère goes miss-ing. Together they join Cinder in the quest to rescue humanity (and her love). Now, in Cress, the tangle-haired prisoner of a Lunar noble seeks the renegade band as Queen Levana's wedding to Prince Kai draws ever nearer. Trapped in a lonely satellite, Crescent Moon has been crushing on the infamous Carswell Thorne (a roguish fellow-prisoner friend of Cinder's), not knowing that he is among the very gaggle of renegades she has been tasked to find. In a botched rescue attempt, Thorne and Cress fall to Earth in the middle of the Sahara, and the scoundrel captain—think Han Solo meets Indiana Jones—must now protect the innocent Lunar and somehow reunite with his friends. Meyer, like Kontis, uses a familiar tale to launch a story like no other. (c) Copyright 2014. Library Journals LLC, a wholly owned subsidiary of Media Source, Inc. No redistribution permitted.

This third of four books in Meyer's Lunar Chronicles has no shortage of humor, action, or romance, and the author still delivers the clever fairy-tale twists her readers expect. Cress, a self-proclaimed "damsel in distress," has been imprisoned in an orbiting satellite for more than seven years, and has never been allowed to cut her hair, which has grown to Rapunzel-like lengths. Though Cress—an expert hacker—is supposed to be tracking down the fugitive Linh Cinder for Lunar Queen Levana, Cress has been secretly aiding her. When Cinder and her crew try to rescue Cress, the plan goes awry, leaving Cinder's group scattered and fighting for survival. Meyer continues to show off her storytelling prowess, keeping readers engaged in a wide cast of characters while unfolding a layered plot that involves warring governments and a fast-spreading plague. The momentum Meyer built in the first two books continues to accelerate as the stakes grow higher for Cinder and her friends. The next installment cannot come fast enough. Ages 12–up. Agent: Jill Grinberg, Jill Grinberg Literary Management. (Feb.)