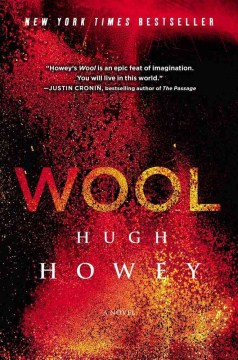 Folks in Howey's postapocalyptic novel live underground in a massive bunker silo consisting of approximately 150 unelevatored levels: administration is on the top levels, medical at level 20, gardens on level 50, pigs on level 90, 106 is ladies lingerie, a big farm on 130, and mechanical starts on 140. Outside, the world is deathly toxic and unseen except through some manky old remote cameras. The most extreme form of punishment in this otherwise happy world is cleaning the remote cameras, and the exile that follows is between Shirley Jackson's The Lottery crossed with Logan's Run. After the dutiful sheriff Holston's unlikely request to return to the outside is fulfilled, readers get a thumbnail sketch of the silo's society as his replacement, Jules, is recruited. Howey's hints at periodic revolts to upset the balance of power are surprises for the readers as is bright and beautiful Jules, an ex-mechanic with a frighteningly strong work ethic, who is determined to learn fast and do justice. Unfortunately, she and her mechanic friends have made powerful enemies in IT, a shadowy, devious group that hog most of the silo's resources and give back little except secrecy. Soon after Jules meets Lukas, a quiet IT guy with a rebellious streak, she, too, is sentenced to clean the cameras; however, she makes it out of sight of the cameras! Makes it to…where? The uncertainty and pressure push the silo's unstable situation into an uprising. Verdict A plodding pace is relieved by Howey's flipping between the present and anywhere from days to years prior and a wild variation among narrative focal characters. An impressive debut in a new series; readers will swoon over the character Jules and the unpredictable early plot. (c) Copyright 2013. Library Journals LLC, a wholly owned subsidiary of Media Source, Inc. No redistribution permitted.

Former bookseller Howey examines the lives of a group that inhabits a massive underground silo that shelters them from the toxic wasteland outside in this interesting but poorly executed debut novel. Sheriff Holston makes sure that law and order are kept in the silo, especially if anyone breaks the most dreaded taboo: expressing a desire to go outside. Anyone who does is immediately condemned to a ritual called "cleaning", wherein they are sent to clean the cameras that project images from outside on the walls of the silo's upper floors. After Holston breaks the taboo, he is replaced by Juliette, an intelligent and hard-headed mechanic from the bowels of the silo with little interest in being sheriff. Juliette discovers information on Holston's hard drive that explains why he broke the taboo and leads her to believe that everyone has been lied to about the outside as well as the nature and purpose of the silo, starting a chain reaction that may bring the silo's tenuous grasp on existence to an end. Wool's success as a self-published e-book is not surprising given its one-two punch of post-apocalyptic wasteland and futuristic dystopia, but Howey's immaturity as a writer, especially the bland characters and conflict reminiscent of B-movies, overshadows his intriguing world. (Mar.)

The book of JoanYuknavitch, Lidia